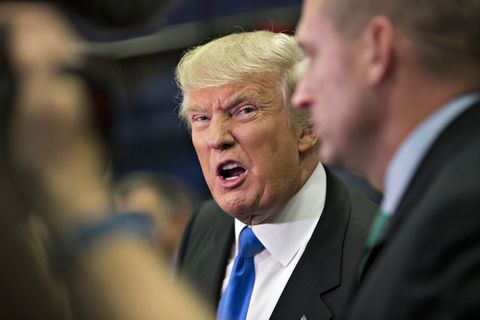 Just when you think we've reached the limit on how shameful the president can be, he outdoes himself. This morning, in a series of tweets, Trump announced that the government will not "accept or allow transgender individuals to serve in any capacity in the U.S. military." His reasoning, if you can call it that, is that the military cannot be "burdened with the tremendous medical costs and disruption that transgender [sic] in the military would entail."

This news comes a little more than a year after Trump tweeted to the LGBT community, "I will fight for you while Hillary brings in more people that will threaten your freedoms and beliefs." Trump doesn't really care about trans people's rights one way or another—just how he can use them to his political advantage.

With this morning's ban on trans service members, Trump can not only finally have a "win," but also cultivate glowing support from evangelicals and conservatives.

Thankfully, just because Trump tweets something doesn't make it so; the president cannot simply declare, over Twitter no less, that trans people will not be allowed in the military. But this announcement is a reminder of Trump's fundamental leadership strategy: Attack the most marginalized—especially when they're down.

Trump's agenda is failing in a monumental and public way, people are furious about healthcare, and the president's approval ratings are historically low. Despite claiming that he's signed more bills than any president ever (blatantly untrue), Trump has yet to pass one significant piece of legislation. But by making this morning's declaration about trans service members, Trump can not only try to finally have a "win," but also cultivate glowing support from evangelicals and conservatives.

More importantly, it puts Trump in his most comfortable mindset: that of a bully. The trans community is already suffering intense legal and cultural discrimination in the U.S., from hateful 'bathroom bills' that keep trans people from using the correct facilities to horrific violence, especially against trans women of color. This latest statement from Trump just furthers that dehumanization against an already-suffering group of people. But that is when Trump is most himself.

Of course, it should go without saying that Trump's arguments for why trans people should not serve in the military is complete bunk. "Disruption" and "medical costs" are the same reasons cited by those who want to keep cis women out of combat roles. In addition to explicitly sexist ideas about what are "proper" roles for women, the argument from conservatives is that male soldiers would be sexually distracted by having women around and that women's healthcare is inherently more expensive than men's. Similar arguments were also used to claim that gay people shouldn't serve.

Ideas like this were nonsense then—and they're nonsense now. And the people who think them are little more than culture war hold outs, desperate to stop the world from progressing faster than their bigoted minds can handle.

Trump's fundamental leadership strategy: Attack the most marginalized—especially when they're down.

According to the Williams Institute at the UCLA School of Law, as of 2014 over 150,000 trans people have served in the armed forces or are on current active duty. Enacting the sort of ban Trump is talking about will not necessarily keep trans people from serving, but it would absolutely keep them from serving openly, safely, and receiving any medical care they need.

What message is our country sending now?