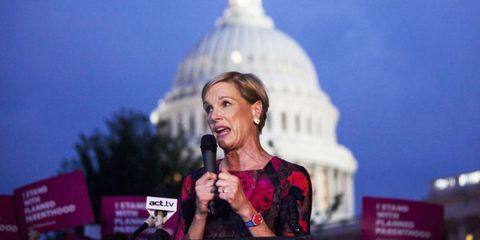 After lord-knows-how-many failed attempts to repeal and replace Obamacare, Senate Republicans are back at it again. This time they're trying to crash in the Graham-Cassidy bill before next week's budget reconciliation deadline—a health care bill numerous experts are calling the worst one yet. MarieClaire.com spoke with Cecile Richards, president of Planned Parenthood, about the latest legislation. Her take: "It's terrifying for women."

"If you're a woman who has given birth, it's estimated that insurers could charge you up to $17,000 more a year."

The reason? Well, there are multiple—"there are so many problematic and dangerous aspects of this bill," laments Richards—but at the heart of nearly all of them is this: The plan isn't much of a plan at all. It simply passes the power to regulate health care from the federal government to the states. In doing so, it gives those governments the ability to waive the insurance mandates that came with the Affordable Care Act (ACA). So, for example, your state could decide to let insurance companies charge more for pre-existing conditions.

"If you're a woman who has given birth, it's estimated that insurers could charge you up to $17,000 more a year for coverage," explains Richards. "This bill will allow insurers to charge breast cancer survivors more for their coverage—some estimate $30,000 more. These numbers are prohibitive."

The bill also abolishes the ACA's requirement that all plans cover maternity care and preventative care and institutes a nationwide ban on abortion coverage—even for private plans. And what are republicans offering as a solve? Women could pay extra for a rider, as women in Texas already have to. It amounts to "rape insurance," says Richards. "Women would have to somehow anticipate that they would need an abortion and buy a rider to cover that." 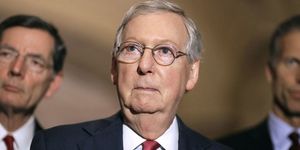 What Happens When You Can\'t Afford an Abortion?

"I can't say it enough: Planned Parenthood is not in the federal budget. We do not get a check from the federal government. We get reimbursed—not for abortion services—we get reimbursed for cancer screenings, for STI screenings and treatment, for birth control. All that will not longer be available for patients to get at Planned Parenthood if they're on Medicaid," explains Richards.

"The people who are going to be punished by this bill the most are the women who have relied on Planned Parenthood for affordable health care," she says.

"Women should be able to choose their own healthcare provider. For about 2.5 million women, they choose Planned Parenthood."

Regardless of whether they patronize Planned Parenthood, this bill is likely to negatively affect all Medicaid patients, because "the bill completely goes after Medicaid," Richards says, noting that there's no Congressional Budget Office (CBO) score yet, but that experts are "concerned millions of people will lose insurance because of the radical restructuring of Medicaid." Women and children disproportionally access their care through the program.

"The irony of it all is that Paul Ryan started this crusade because he said that the wanted people to have choice in their healthcare provider," Richards points out. "Women should be able to do the same. For about 2.5 million women, they choose Planned Parenthood."

We know that you have health care fatigue. You are exhausted by all the frenzied talk of the last 8 months. But that's exactly what these republican lawmakers want: to pass a bill that's been denounced by all major health organizations while American women are distracted by something else.

"The reason the previous bills have been blocked is because people have spoken up," says Richards. "Go to istandwithpp.org to find a resistance event near you. Call your senator, call your representative. Now is the time to tell them how you feel."

Danielle McNally Danielle McNally is the Deputy Editor of Marie Claire, overseeing features across every topic important to the MC reader: beauty, fashion, politics, culture, career, and women's health.
This content is created and maintained by a third party, and imported onto this page to help users provide their email addresses. You may be able to find more information about this and similar content at piano.io
Advertisement - Continue Reading Below
More From Politics
How to Demand Justice for Adam Toledo
Daunte Wright's Death Sparks Protest in Minnesota
Advertisement - Continue Reading Below
41 Surprising Rules First Ladies Have to Follow
Asian American Women on Where to Go From Here
Syrian Journalists Reflect on a Decade of War
How to Show Your Support for the AAPI Community
Activist Lydia X. Z. Brown on Disability Justice
Elisa Crespo: "I'm Not Here to Make History"
What We Know About the Georgia Spa Shootings
Dianne Morales Has Never Listened to the Naysayers