As billionaire and former New York City mayor Michael Bloomberg continues his late-stage campaign for president in 2020, he's been on the campaign trail with his current partner Diana Taylor. She is not the mother of his two kids: Bloomberg was only married once, to Susan Brown. The two split in 1993, but if reports are to be believed, they still have a more-than-cordial relationship. The pair are, in fact, called "best friends" by those closest to them. Here's what we know about Brown, her union with Bloomberg, and where they stand now.

Susan Brown (maiden name Meyer) had been married before and divorced, according to the wedding announcement in the New York Times. She'd attended school in York, England and Neuchatel, Switzerland. The two have two children together, Georgina and Emma. Apparently they disagreed, often, about how much time he was spending away from his family.

"They were not getting along because their lives are not compatible," Emma explained. "My mother doesn't want to be social all of the time. She was perfectly happy to curl up with a book and not go out all week." But the pair remained friends after the divorce—Brown and her then-boyfriend campaigned for her ex and, as of 2001, were still celebrating holidays together.

Bloomberg also continued to support Brown after the divorce. In 2012, the New York Times reported:

"In 2011, Mr. Bloomberg helped his ex-wife, Susan, with at least two financial transactions: He provided a bridge loan of more than $500,000 so she could buy a new apartment, while she waited to close on the sale of her previous one, and he transferred more than $500,000 into a trust in her name."

According to Emma, "My parents are best friends...Nobody understands that until they actually see it." She was so positively impacted by the situation that she referenced it in her college essays, calling it "one of the best things that ever happened to me."

The couple, who have been together for 20 years, met at a business lunch, and he asked her out at a restaurant later. She's worked on Wall Street since the 1980s, was appointed New York state’s superintendent of banks in 2003, and even had fleeting political aspirations of her own. “Her famous boyfriend may be the least interesting thing about her,” said Anna Wintour. “She’s intelligent, independent—and completely her own person. Michael is lucky to have her.”

They're not married, and don't seem to have any plans to be. Taylor says there really isn't a word for what they are—partner seems to be the closest. She's a "step-whatever...friend" to his kids, and fierce supporter of his political aspirations. 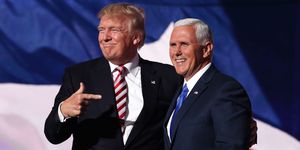 The GOP Is Letting States Defund Family Planning
Katherine J Igoe Katherine’s a Boston-based contributing editor at Marie Claire online who covers celebrity, fashion, entertainment, and lifestyle—from “The Bachelor” to Everlane to Meghan Markle.
This content is created and maintained by a third party, and imported onto this page to help users provide their email addresses. You may be able to find more information about this and similar content at piano.io
Advertisement - Continue Reading Below
More From The 2020 Presidential Election
A Breakdown of VP Harris's Net Worth
This Is How Much Joe Biden Is Worth
Advertisement - Continue Reading Below
Kamala Harris Is "Momala" to Two Stepchildren
Joe Biden's Grandkids Are Among His Biggest Fans
Joe Biden's Son Beau and the Story of His Death
Kamala Once Clashed With Biden Over Abortion
Where Kamala Harris Stands on Gun Control
Unraveling the Latest Kamala Harris Controversy
Who Is Donald Harris, Kamala Harris's Father?
Kamala Harris Is Married to Her Number One Fan