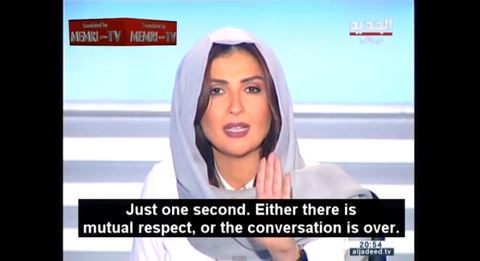 On the Al-Jadeed TV program Bidoun Zaal, journalist Rima Karaki was interviewing London-based Islamist Hani Al-Siba'i about Christians who have been joining extremist groups like ISIS. Al-Siba'i went on a tangent, talking about the history of the phenomenon rather than current events. Karaki asked him to "focus on the present," then followed up with a more pressing question.

"Listen, don't cut me off," the sheik responded, shouting at her. "I will answer as I please. I will not answer the way you like, because I'm here to serve the idea in which I believe."

"Go on, but don't call me names," Karaki responded. "In this studio, I run the show."

"How can a respected sheik like yourself tell a TV host to shut up?" she asked.

"I am respected whether you like it or not," he responded. "It's beneath me to be interviewed by you. You are a woman who…" Al-Siba'i said, before his microphone was cut off.

"Just one second," the host interrupted. "Either there is mutual respect, or the conversation is over." The video, posted March 4 by the Middle East Media Research Institute, has received more than 5 million views on YouTube.

The video hit the Internet at the perfect time. The exchange was a week before International Women's Day, and The Daily Dot points out that Lebanese law does not consider women to be equals in many respects.

"Some people think men have a birthright to exert control over women, but there are a lot of women now who are breaking this image and a lot of men who support this, although more so for women because we have a patriarchal society," Karaki told the Guardian in an interview. "I don't feel like a hero, I feel like any man or woman with self-respect."

Karaki stopped short of calling Al-Siba'i sexist, but definitely thinks he has bad manners. "I don't know if perhaps if it was a man, he would not have told him to shut up, but I took it as being disrespectful," she told the newspaper. And the disrespect came after she met him halfway by wearing a headscarf on camera, which she normally doesn't do.

For his part, Al-Siba'i lashed out in a statement on social media. He called out the network for trying to portray him as an irrational radical and said Karaki spoke "deliriously," like a "demon" had come out of her. He is demanding the network issue an apology on his behalf.

This is hardly the first time Karaki has called out the powerful on air; she has been on television for 15 years, and Arab TV news is famously confrontational. She got her start in 1998 on the morning show Alam al Sabah. After 10 years, she moved on to host a controversial show called Personal Matters that discussed society and family, and also hosted a celebrity-themed show called You and I. She has written a critically acclaimed book, Tonight I Will Confess, and now interviews public figures on Bidoun Zaal. (Though gender equality is a pressing issue in the Middle East, female television personalities have been commonplace there for decades.)

Originally, Karaki didn't expect to go into broadcasting. She studied business in college and had a good job at the central bank before deciding to make the switch to television. It happened by accident, after she accompanied friends who were auditioning to become hosts; a director saw her on set an asked her to try out too. Her parents "considered my move to TV as an irrational act," she told Lebanon's Fit 'n Style magazine in February. But now her reporting has won multiple awards, and this encounter has given her a global profile.

Updated, 3/10 5:20 p.m.: An original version of this story referred to Karaki as Jordanian. She is Lebanese.

Inside the Double Lives of Pakistan's Cross-Dressing Men