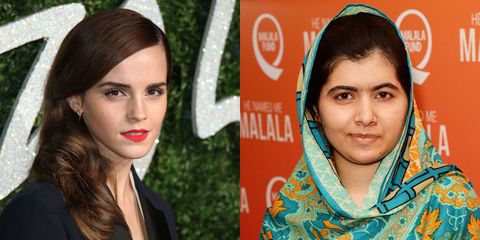 On November 4, 2015, Emma Watson and Malala Yousafzai sat, like, two feet away from each other. That along would be news, but they talked! About Yousafzai's documentary and equality and education and feminism and how annoying their brothers can be! AND IT WAS GLORIOUS. *expires from overexposure to glory* *resurrects self to finish this story*

In a Facebook post every bit as starry-eyed as this article (deal with it), Watson commends Yousafzai for her determination and recalls a pivotal moment from the conversation, which she never expected to happen.

"To give you some background, I had initially planned to ask Malala whether or not she was a feminist but then researched to see whether she had used this word to describe herself," Watson wrote. "Having seen that she hadn't, I decided to take the question out before the day of our interview. To my utter shock Malala put the question back into one of her own answers and identified herself. Maybe feminist isn't the easiest word to use...But she did it ANYWAY. You can probably see in the interview how I felt about this."

Ahem. It is very gratifying to see not only these two brilliant young women discussing their advocacy but also the public's response to their work. (Almost 28,000 shares and the highest nice-to-mean comment ratio I've ever seen on something not related to baby animals.) Please watch the full interview/join us in flailing below. Thank you.

Chelsea Peng I'm Chelsea Peng, the assistant editor at MarieClaire.com.
Advertisement - Continue Reading Below
More From Politics
Is Any Republican Running Against President Trump?
Get to Know CBS News Anchor Norah O'Donnell
Advertisement - Continue Reading Below
Everything We Know About Senator Warren's Husband
Mayor Pete's Husband Would Be a "First Gentleman"
How a Parkland Mom Turned Her Grief into Action
He Voted for Trump. She Voted for Bernie.
How Guerrilla Feminists Are Fighting Femicide
Who Was Mayor Pete's Father, Joseph Buttigieg?
Nancy Pelosi, Icon, Ripped Up Trump's SOTU Address
Thoughts From a First-Time Caucus-Goer