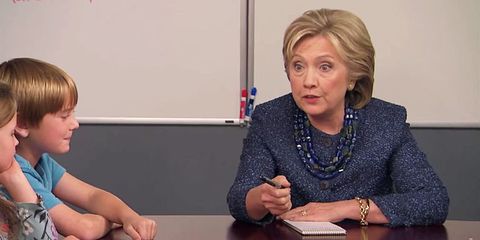 In every single "Kids Comment on Fill-in-the-Blank" video, there's always that one precious child who makes you wonder if he's a mole the producers planted to shake things up. In this clip from Jimmy Kimmel, that little rabble-rouser is Jayden, who tells Hillary Clinton to her face a woman can't be president.

"Old biases are hard to shake," Kimmel said as he introduced the video. "Our best hope for equality is our next generation. Children are our future whether they like it or not, and I wondered if they might have a more evenhanded take on this kind of discrimination. Things have changed a lot over the last 30 years."

But oooooh they have not. While Belle and Sydney predict a female president would end wars "so people could be more healthy and won't die," Jayden and Andrew said she'd be too scared/too busy painting the White House pink to fulfill her duties as Commander in Chief. 😢

Watch the video below. And pray for the youths.

Chelsea Peng I'm Chelsea Peng, the assistant editor at MarieClaire.com.
Advertisement - Continue Reading Below
More From Politics
British PM Boris Johnson Has Coronavirus
Fear Is a Virus
Advertisement - Continue Reading Below
COVID-19 Exposes the Dangers of Gender Inequality
“I’m Homeless—How Can I Self-Quarantine?”
Will the Conventions Be Canceled in 2020?
Rep. Katie Porter on Being an Effective Politician
Time's Up CEO Reflects on the Weinstein Verdict
Everybody Running for President In 2020
Warren Has Dropped Out of the Presidential Race
The Swing States We Need to Pay Attention to Now