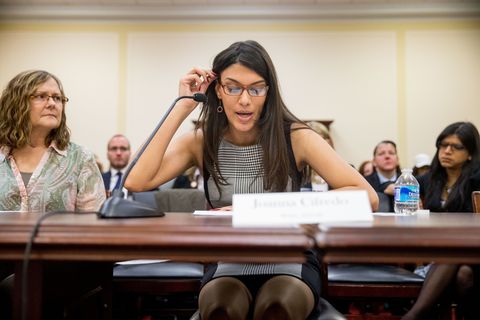 For a few transgender Americans, this has been a year of glamour and fame. For many others, 2015 has been fraught with danger, violence, and mourning.

While Caitlyn Jenner made the cover of Vanity Fair and Laverne Cox prospered as a popular actress, other transgender women have become homicide victims at an alarming rate. By the count of the National Coalition of Anti-Violence Programs, there have been 22 killings so far this year of transgender or gender-nonconforming people — including 19 black or Latina transgender women. The toll compares with 12 last year and 13 in 2013, and is the highest since advocacy groups began such tallies a decade ago.

"Most Americans think it's been an amazing year for transgender rights," said Mara Keisling, executive director of the National Center for Transgender Equality. "But for the transgender community, it's been one of the most traumatic years on record."

"For the transgender community, it's been one of the most traumatic years on record."

Death by death, the details are horrific. Kiesha Jenkins was beaten and shot dead by a cluster of assailants in Philadelphia. Tamara Dominguez was run over multiple times and left to die on a Kansas City street. Police said the most recent victim, Zella Ziona, was shot dead in Gaithersburg, Maryland, last month by a boyfriend embarrassed that Ziona showed up in the presence of some of his other friends.

A couple listens to a speech about violence against transgender people during a Trans Day of Remembrance event in New York.
Julie JacobsonAP

There's no question that anti-transgender hatred fueled many of the killings, yet activists and social-service professionals say there are multiple factors that make transgender women of color vulnerable. They have documented that numerous victims were killed by intimate partners and many while engaging in prostitution.

"For many of these women, it's chronic unemployment or participation in survival sex work," said Louis Graham, a University of Massachusetts professor who has studied the experiences of black transgender women. Many are beset by homelessness and economic desperation, sometimes ending out in coercive and violent relationships, Graham said.

Chase Strangio, an American Civil Liberties Union attorney, said that for many perpetrators of the violence, "there's a sense of transgender people being less than human."

"There's a sense of transgender people being less than human."

Philadelphia has experienced two confirmed homicides of transgender people this year — as have Detroit and Kansas City. In May, London Chanel was fatally stabbed by her roommate's boyfriend in North Philadelphia; on Oct. 6, Kiesha Jenkins, 22, was attacked and shot dead by a group of men. Police Capt. James Clark said Jenkins was a prostitute, and described the assault as a robbery, not a hate crime. Police soon arrested a suspect with a prior record of robbery arrests.

Nellie Fitzpatrick, a former assistant district attorney who now heads the Philadelphia mayor's Office of LGBT Affairs, said some transgender Philadelphians harbored long-standing mistrust of the police and were frustrated that Jenkins' killing was not being investigated as a hate crime, though Pennsylvania does not have a hate-crimes law covering gender identity.

However Fitzpatrick credited the police department with working to improve relations. One key step: establishing formal guidelines for officers' interactions with transgender people. Deputy Police Commissioner Kevin Bethel said the guidelines, as well as LGBT-specific components in training at the police academy, were having a positive impact. "It's not perfect," he said. "But we're moving in the right direction."

Among those killed in Detroit was Ashton O'Hara, whose stabbed body was found in a field in July. O'Hara embraced feminine attributes but was comfortable being addressed with male pronouns. His mother, Rebecca O'Hara, said she noticed the tendencies while Ashton was still a toddler.

"How could you be against a person for being happy about who they are?" she asked during a telephone interview. She marveled at Ashton's skills as a hairdresser and makeup artist, yet worried about potential nastiness from others. "For years, I was afraid I was going to get that phone call, telling me he's hurt or dead," she said. "He'd say, 'I'll be all right. Nothing will happen.'" Police have arrested a 37-year-old man and charged him with Ashton's murder.

The other victim in Detroit this year was Amber Monroe, 20, shot dead in an area frequented by prostitutes. A friend, transgender-rights activist Julisa Abad, said Monroe had twice previously been wounded by gunshots in that area. "To go back to that same place, life has to feel like you have no other choice," said Abad.

In Kansas City, Missouri, police continue to investigate the death of Tamara Dominguez, a 36-year-old who left Mexico in her late 20s to escape the violence she faced as a transgender woman. At about 3 a.m. on Aug. 15, the driver of an SUV drove into her, ran over her several times, then fled, according to witnesses. There have been no arrests.

The high death toll this year may stem in part from greater awareness of anti-transgender violence.

The high death toll this year may stem in part from greater awareness of anti-transgender violence, and more vigorous efforts to identify homicide cases in which this was a factor. "The violence has been going on for a long time," said Chai Jindasurat of the New York City Anti-Violence Project. "We're now able to identify and document and report on it better."

Transgender prostitution is a harrowing issue. Stefanie Rivera, now client services director with the Sylvia Rivera Law Project in New York, says she engaged in sex work starting as a 12-year-old in Los Angeles. "The fact that I'm here at 36 — I don't know how I made it so far. I had so many close calls," she said, adding two transgender friends were killed while engaged in sex work in Los Angeles.

Activists say there are no easy solutions to the violence. "We need multiple strategies, aiming for sweeping cultural change," said Jindasurat. "The more people understand what it means to be transgender, the more accepting they will be."

Yet many Americans are uncomfortable with transgender people, Jindasurat said. He cited the recent referendum in Houston, where opponents of a nondiscrimination ordinance prevailed by stoking fears about transgender people's access to public restrooms.

In Detroit, Yvonne Siferd has worked with many transgender women as director of victim services for Equality Michigan, an LGBT-rights group. She's impressed by their resilience, yet dismayed by the challenges they face. "We all grow up with this myth that you can be whatever you want when you grow up," Siferd said. "When you do grow up and become your authentic self, the fact that you could be targeted for just being you is terrifying."