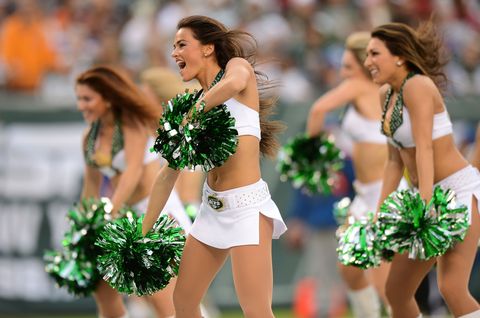 It seems the New York Jets cheerleaders, also known as the Flight Crew, have a lot to cheer about these days. They won $325,000 in a class-action lawsuit against their team, which they claim paid them paltry wages and forced them to work for free and pay for expenses out of pocket.

CNNMoney reports that the settlement was initially reached in August, but a court in New Jersey just approved it. The team agreed to pay $325,000, which amounts to anywhere from $2,559 to $5,913 per worker, depending on how long they worked with the squad, and how much they worked on other promo events like photo shoots, according to The Record.

In the lawsuit, 52 current and former cheerleaders said they were paid $150 a game and were given free uniforms, but still had to practice completely unpaid. They also said they had to fork over their own cash for hair, makeup, and transportation. And they had to pay to conform their image to the squad's strict standards, like having their hair straightened. "When you figure all that up, they were making less than minimum wage," lawyer Patricia V. Pierce told The Record. NFL teams have tried to justify the low pay by classifying the cheerleaders as independent contractors, not employees.

As part of the settlement, the Jets denied any wrongdoing. "The Jets deny the claims and the parties have agreed to a settlement to avoid the expense, time and distraction of litigation," the team said in a statement. The settlement comes as other NFL teams, like the Buffalo Bills, Oakland Raiders, and Cincinnati Bengals are facing similar lawsuits from their cheerleaders. The Bengals have reached a tentative settlement, and the Raiders forked over $1.25 million in their own settlement.