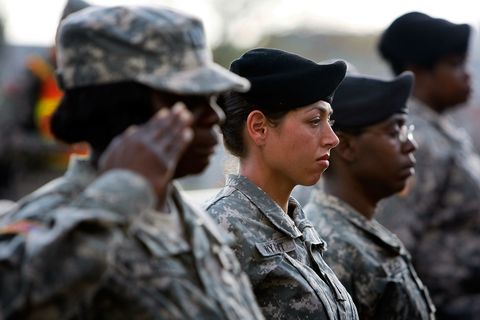 Back in December, Defense Secretary Ash Carter announced that every last position in the U.S. military, combat jobs included, would be open to women. The move was a victory for equality in the armed forces—and it also has major significance for every young woman in America. The Hill reports that top military leaders now want women to have to register for the draft.

Currently, men between 18 and 26 have to register for the Selective Service System and show up for military system if called, even though the last draft happened during the Vietnam War. Back in 1981, the Supreme Court ruled that women didn't have to register for the draft because they weren't eligible for combat jobs. But since that's not an issue anymore, many of the top military brass say it's time for women to step up if duty calls.

Gen. Mark Milley, chief of staff of the army, and Gen. Robert Neller, commandant of the Marine Corps, testified in front of the Senate Armed Service Committee Tuessday that anyone who's physically qualified to serve, both men and women, should have to register for the draft.

"Now that the restrictions that exempted women from [combat jobs] don't exist, then you're a citizen of a United States," Neller said, according to The Washington Post. "It doesn't mean you're going to serve, but you go register."

Sen. Claire McCaskill agreed with the military leaders, saying that even the idea of the draft may make women consider joining the military as volunteers. "Part of me believes that asking women to register as we ask men to register would maybe, possibly open up more recruits as women began to think about, 'Well, the military is an option for me,' " she said. "I think it's the right thing going forward."

Currently, the Selective Service System is fighting two lawsuits: one that argues it's unfair to men, and one that says it's unfair that women can't register. If Congress opens the draft to women, those issues would be resolved.