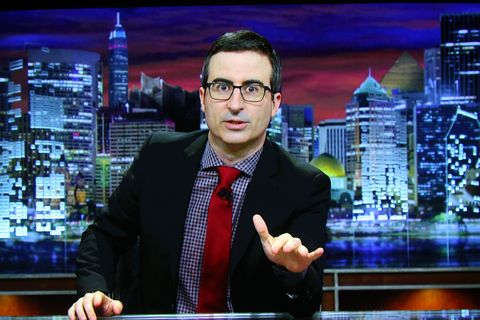 Commence slow-clapping, because John Oliver tackled the *slightly* controversial subject of abortion during Sunday's episode of Last Week Tonight and it was fantastic. Not only did the comedian make a strong case for being pro-choice, but he delivered a gloriously irreverent takedown of regulations that prevent women from seeking the reproductive health care they both need and deserve.

Proof that he slayed/twirled? This sentence: "Abortion cannot just be theoretically legal, it has to be literally accessible."

In the lengthy segment below (watch the whole thing, pretty please), Oliver notes that since 2010, new state laws have contributed to the closing of 70 abortion clinics across the United States. In fact, Mississippi, Missouri, North Dakota, and South Dakota are down to just one clinic each, which means women in those states either have to jump on mile-long waiting lists, or seek care out of state.

These TRAP (Targeted Regulation of Abortion Providers) laws include Texas' House Bill 2, which passed in 2013 and both requires abortion clinics to have the same building standards as out-patient surgical centers, and requires doctors to have hospital admitting privileges. Sounds like no big deal, but these new rules have allowed lawmakers to shut down clinics for insane reasons like "narrow hallways."

"If admitting privileges are so important for continuity of care, it is weird that you don't need them in Texas to run a birthing center," Oliver says. "Texas will shut down an abortion clinic for having walls too close together, but if you want to give birth in a tub surrounded by mood lighting, potpourri, and the music of Bon Iver, no one will say anything."