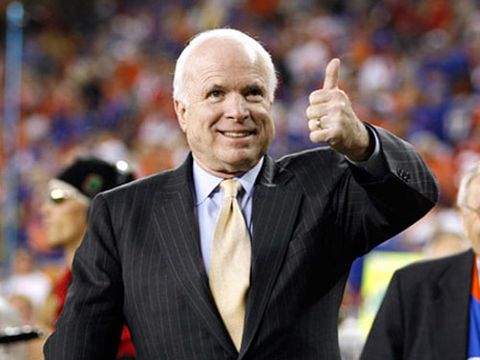 En route to Orlando on his private campaign plane, the Straight Talk Express, John McCain, wearing a rumpled suit, looks braced for his task: Facing a superstar opponent more than 20 years his junior, the one-time maverick is trying to convince America that he is the fresher, better choice for president. Laying aside a book on General David Petraeus, he talks with Marie Claire about his opponent, women voters, and his inner Kiefer Sutherland.

MC: If Barack Obama has indeed challenged you to a duel, as you've put it, what is your weapon of choice?

JM: Lightsabers. [slices an imaginary lightsaber through the air]

JM: Once I ejected from my airplane. Once I had a flameout. And once I was shot down. Cindy gets nervous when we fly. I tell her, "Don't worry. I'm going to die, but not in a plane."

MC: You know Obama fairly well. Do you "like" him?

JM: I admire him, and I like him. I think he has a great deal of talent. He should be applauded for his eloquence and for his ability to motivate millions.

MC: Among single women, Obama is leading in the polls. What are we missing about you?

JM: With all due respect, we're basically tied in the polls. And I'm proud of where we are in our campaign. But let me also say I'm the underdog. I understand - and I hope this does not sound in any way inappropriate - the importance of the women's vote. They are the majority of the population, and many of them are still undecided. So I have to work hard.

MC: You liken Obama to Britney in your famous ad, while portraying yourself as the more serious candidate. Which celebrity would you like to be compared to? Bob Dylan? Jack Nicholson?

JM: Kiefer Sutherland. [laughs, imitates a voice from the show 24] "It's Jack Bauer." We have a lot in common because he escapes all the time.

JM: He's very, very coarse. I also like The Office and Curb Your Enthusiasm. Larry David's the neighbor that you find to be a real pain in the rear end.

MC: People say you have a temper. Are you going to go nuclear on us if you're the president?

MC: How does it work when you and Cindy make household purchases?

JM: She makes most of our purchases because I think she has very good taste, and it's been made abundantly clear over time that I do not. But there are certain areas where I must make my opinion felt . . . including the remote.

JM: There was one big decision that we made together. Cindy had grown up in the house that we lived in. And our kids, except for one, were no longer living there. So we had a long conversation and decided we would move into a condominium. That was one of the most painful days of her life. Now we're happy. We just don't drive by our old house.

MC: When you ran for office in previous years, you went to the movies on election day. What will you see this year - The Dark Knight? Pineapple Express?

JM: Well, I haven't seen Batman yet. But I did see Indiana Jones, and I was very pleased because the old guy won.