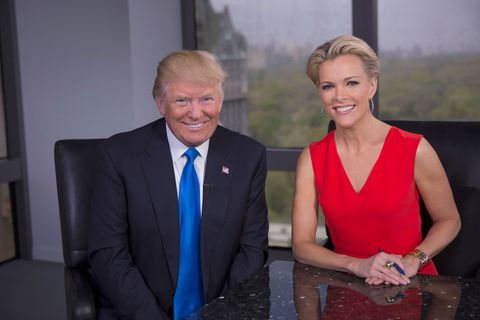 Donald Trump and Megyn Kelly's much-anticipated sit down interview finally aired on FOX, and Kelly most definitely didn't let the Republican presidential candidate get away with the sexist comments he made about her. (Because in case you forgot, aside from implying that Kelly was on her period during the primary debates, Trump felt the need to call her a bimbo on Twitter. What a gentleman!)

"Bimbo? Uh, well, that was a retweet. Did I say that. Ooo. Ok. Excuse me," Trump said when Megyn brought up his comments. "Over your life, Megyn, you've been called a lot worse...It's a modern form of fighting back."

Kelly's response? Totally flawless and perfect: "It's not about me. It's about the messaging to young girls."

Trump isn't typically one to say "sorry," but he did admit that he's made some mistakes along the campaign trail. "I could've done certain things differently. I could've used different language in a few instances, but overall I have to be proud of what I've done," he said. "If I were soft, if I were 'presidential'...if I hadn't fought back the way I fought back, I don't think I would've been successful."

Not sure using the words "bimbo," "dog," "fat pig," and "piece of ass" to describe women counts as "fighting back," but okay.