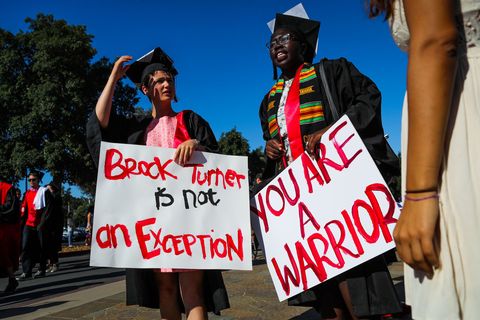 "For now, I am every woman," she said in a statement in June. Now, the Stanford rape survivor, otherwise known as Emily Doe, has written a new essay about finding strength and solidarity in the fallout.

"I yelled half of my statement," she wrote in a letter as a Glamour Woman of the Year. "So when it was quickly announced that he'd be receiving six months, I was struck silent. Immediately I felt embarrassed for trying, for being led to believe I had any influence. The violation of my body and my being added up to a few months out of his summer. The judge would release him back to his life, back to the 40 people who had written him letters from Ohio. I began to panic; I thought, this can't be the best case ­scenario. If this case was meant to set the bar, the bar had been set on the floor."

Doe continues, describing the public's reaction to her moving, historical speech in court, then the inevitable shaming, including one particularly cutting comment: "Sad. I hope my daughter never ends up like her."

Chelsea Peng I'm Chelsea Peng, the assistant editor at MarieClaire.com.
This content is created and maintained by a third party, and imported onto this page to help users provide their email addresses. You may be able to find more information about this and similar content at piano.io
Advertisement - Continue Reading Below
More From Politics
Meet the Next Presidential Pets, Major and Champ
Who Is Jen Psaki, Biden's Press Secretary?
Advertisement - Continue Reading Below
Bernie Sanders at the Inauguration Is a Whole Mood
The Inaugural Concert Was a Cheesy Balm
Read VP Kamala Harris's Inauguration Speech
No, There Is No Inaugural Ball This Year
Kamala Harris Is "Momala" to Two Stepchildren
Read Amanda Gorman's Moving Inauguration Poem
America's New Obsession: Amanda Gorman
Jennifer Lopez's Bilingual Message Is Important