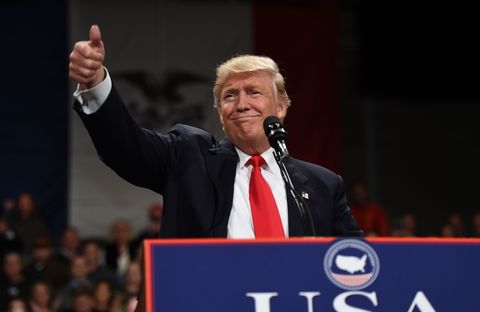 It's been a busy week for Donald Trump: His Cabinet picks are going through confirmation hearings, he held his first press conference in more than 100 days, and he's been batting away serious allegations about Russian ties. But he took time Thursday morning to tweet his support of clothing brand L.L. Bean.

Thank you to Linda Bean of L.L.Bean for your great support and courage. People will support you even more now. Buy L.L.Bean. @LBPerfectMaine

L.L. Bean faced a backlash this week after news broke that the brand's Linda Bean, who is one of the more than 50 family members who is part-owner and who Trump tagged in his tweet, supported a Trump-friendly PAC during the election.

The brand was added to the "Consider Boycotting" list by #GrabYourWallet, a spreadsheet shared over social media that tallies companies that support Trump or do business with the Trump family. But L.L. Bean immediately attempted to distance itself by posting an open letter on Facebook disavowing any kind of political agenda.

And Linda Bean went on Fox News to call the boycott "bullying."

So far, the president-elect's tweets have had a major impact on business. He's sent stock prices of Toyota, Lockheed Martin, and Boeing plummeting with negative posts. We'll see what his love does for L.L. Bean (and duck boots).

Kate Storey Senior Staff Writer Kate is a writer for Esquire covering culture, politics, style, and lifestyle.
Advertisement - Continue Reading Below
More From Politics
How a Parkland Mom Turned Her Grief into Action
He Voted for Trump. She Voted for Bernie.
Advertisement - Continue Reading Below
How Guerrilla Feminists Are Fighting Femicide
Who Was Mayor Pete's Father, Joseph Buttigieg?
Everything We Know About Senator Warren's Husband
Mayor Pete's Husband Would Be a "First Gentleman"
Nancy Pelosi, Icon, Ripped Up Trump's SOTU Address
Thoughts From a First-Time Caucus-Goer
And Now, a Word From the Future Voters of Iowa
Ayanna Pressley Wants Total Justice for Survivors