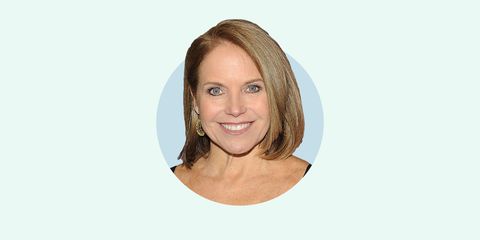 Tonight, National Geographic will air a documentary about the gender revolution taking place in America—which completely makes sense under an Obama administration. Under the current Trump administration, it might feel a little like a progressive last hurrah—especially since the rights the LGBTQ community and allies fought so hard for feel somewhat tenuous due to that leaked executive order draft. The White House issued a statement saying LGBTQ people will—at the very least—not face workplace discrimination, but things are tense and scary, and yes, many people feel powerless.

With this at the back of our minds, MarieClaire spoke to Gender Revolution's Katie Couric about finding our voices, the LGBTQ community's future under Trump, and society's obsession with the gender binary.

On whether silence is compliance in the face of persecution:

"It can be. It depends on the circumstances. A lack of education is really dangerous. Silence can mean compliance. We do have an obligation as citizens of the world to stand up for what we believe in, and to speak out when we don't agree."

"Sometimes people feel powerless in the hierarchy of a democracy. But there's real power in individual voices, particularly when they come together. I've seen voices come together and move mountains, usher in significant social change, and a change in power structure. People need to know how to channel their voices in lieu of silence. Sometimes that's challenging."

On the LGBTQ community's future under President Trump:

"I think we're all waiting, and I don't necessarily want to draw a conclusion. The administration issued a statement about protecting the LGBT community, but what this will mean in terms of the Supreme Court case with Gravin Grimm, the bathroom law, and instructions to schools from the Obama administration..."

On nervousness in the LGBTQ community:

"There's a high degree of nervousness among people in that community, but it's heartening to see that this is a social movement which has really gained speed. This is a segment of the population that's not going to go backwards in terms of speaking out, making their voices heard and demanding rights. This is an important time. We'll see what happens."

On society's pre-occupation with the gender binary:

"People are people. There are cultural and biological factors that make us identify the way we do. But when all is said and done, it's an unnecessary pre-occupation. It's a way to organize the world, but the world is more complicated than we realize."

On spearheading a documentary about gender as a cis woman:

"The documentary was directed at people like me—who didn't have a clear understanding of these issues. People who want to know more, want to understand, but don't have an apparatus to do that. Since it was for people like me, I thought it was okay for me to be their proxy. If it's only told by people within the community, it may not have the impact of changing hearts and minds outside the community. I tried to be a bridge between those two artificial worlds, to create better understanding to all of us."

Mehera Bonner Contributor Mehera Bonner is a news writer who focuses on celebrities and royals.
This content is created and maintained by a third party, and imported onto this page to help users provide their email addresses. You may be able to find more information about this and similar content at piano.io
Advertisement - Continue Reading Below
More From Politics
What Liberation Means This Juneteenth
Kathryn Garcia: It's Time to Step Up or Shut Up
Advertisement - Continue Reading Below
A Valedictorian Speaks Out Against Abortion Bans
Standing Between Care and Violence
Seeking Healing a Century After the Tulsa Massacre
What to Know about Texas's Abortion "Trigger Ban"
A New Book Invites Us to Rethink Menstrual Equity
We Must Remember George Floyd's Legacy
This Is How Much Joe Biden Is Worth
Joe Biden's Granddaughter Is His Biggest Fan