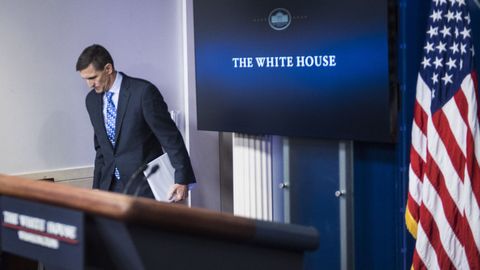 Late Monday night, President Trump's national security adviser Michael Flynn resigned following reports he had misled the administration about his talks with Russia's ambassador. Now, top Democrats in Congress are demanding to know how long Trump and his team knew about Flynn's communication with Russia.

Flynn admitted in his resignation letter he gave "incomplete information" to Vice President Mike Pence and others about his conversation with Russia's ambassador to the United States. If he did, as reports indicate, discuss sanctions with the ambassador, it would have broken diplomatic rules and possibly even a law that keeps private citizens from conducting diplomacy. And the Justice Department had warned the Trump administration weeks ago that Flynn could be vulnerable to Russian blackmail.

Now, top-ranking Democrats in Congress are demanding an investigation into what the Trump administration knew about Flynn, and when they knew it. House Democratic Leader Nancy Pelosi issued a statement calling on Congress to commission a bipartisan, independent investigation. "Flynn's resignation is a reflection of the poor judgment of President Trump and demands answers to the grave questions over the President's involvement," she said in a statement. "By what authority did Flynn act and to whom did he report?"

Rep. John Conyers, ranking member on the House Judiciary Committee, and Rep. Elijah Cummings, ranking member on the House Committee on Oversight and Government Reform, released a joint statement demanding a "full classified briefing" from the FBI and the Department of Justice about Flynn before Thursday. "We in Congress need to know who authorized his actions, permitted them, and continued to let him have access to our most sensitive national security information despite knowing these risks," the statement reads. California Rep. Adam Schiff, the top Democrat on the House Intelligence Committee, told the Associated Press that Flynn's resignation "does not end questions over his contacts with the Russians."