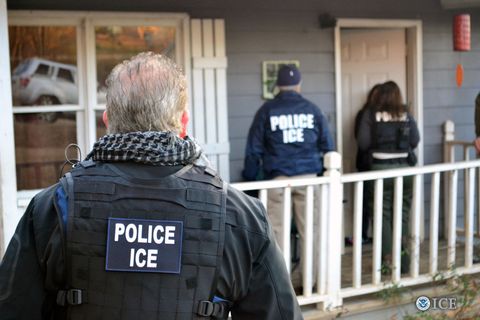 Update, 2/27: Irvin Gonzalez, the transgender woman arrested by ICE agents while at an El Paso, TX, courthouse seeking a protective order against her ex-boyfriend earlier this month, has spoken publicly for the first time.

Gonzalez, who has been held in a county jail since February 9th, tells the New Yorker, that she has been denied the hormones she takes and is suffering from withdrawal. She complained that she couldn't sleep, is experiencing tooth aches and headaches, and that she has begun to grow facial hair. "I am in shock," Gonzalez said.

The circumstances of her arrest sparked concern in local law enforcement officials and the area's congressional representative Beto O'Rouke (D-TX), who have called for an investigation into how Gonzalez's arrest was handled. Of particular concern: The official criminal complaint filed against her says the officers simply spotted her leaving the courthouse. (Courthouse surveillance footage shows the officers arresting her inside the building.)

Gonzalez says that, although she was worried about having to confront her ex, she had originally "felt very safe and protected in the court."

Original Post, 2/16: An undocumented woman seeking protection from her allegedly abusive boyfriend was arrested by federal immigration agents last week *while she was at a courthouse filing a restraining order against him*.

According to El Paso County Attorney Jo Anne Bernal, six Immigration and Customs Enforcement (ICE) officials entered the courthouse on February 9 to arrest Irvin Gonzalez, who has a history of arrests and deportation, because she is undocumented, reports the El Paso Times. Bernal believes that authorities were tipped off by Gonzalez's alleged abuser, Mario Alberto De Avila, who himself had been detained by ICE earlier.

In late 2016, Gonzalez made three police reports alleging that she had been punched, kicked, and chased with a knife by De Avila. Gonzalez had been staying at the Center Against Sexual and Family Violence.

Obviously this new development in our country's rapidly changing immigration policy is worrisome, considering that victims of domestic abuse already have plenty to be scared of when coming forward to authorities about their attacker. What's more, abusers commonly seek to control undocumented partners by threatening to alert immigration authorities, says 65th District Judge Yahara Lisa Gutierrez, who oversees the court that issued Gonzalez's protective order.

According to Bernal, Gonzalez also identifies as transgender. Domestic violence occurs at higher rates among the transgender community than in the general population—50 percent of transgender people will experience violence at the hands of a partner in their lifetime, according to a review by The Williams Institute.

This news comes on the heels of immigration raids across the country. In the last week more than 640 people were arrested, per a Department of Homeland Security statement.

Danielle McNally Danielle McNally is the Deputy Editor of Marie Claire, overseeing features across every topic important to the MC reader: beauty, fashion, politics, culture, career, and women's health.
This content is created and maintained by a third party, and imported onto this page to help users provide their email addresses. You may be able to find more information about this and similar content at piano.io
Advertisement - Continue Reading Below
More From Politics
Greta Thunberg Expertly Trolled Boris Johnson
The Hope and Heartbreak of Derek Chauvin's Verdict
Advertisement - Continue Reading Below
What Mainstream Environmentalism Gets Wrong
Ma’Khia Bryant: What We Know
Jury Finds Derek Chauvin Guilty on All Charges
Senator Hirono on Her New Memoir 'Heart of Fire'
How to Demand Justice for Adam Toledo
Daunte Wright's Death Sparks Protest in Minnesota
41 Surprising Rules First Ladies Have to Follow
Asian American Women on Where to Go From Here