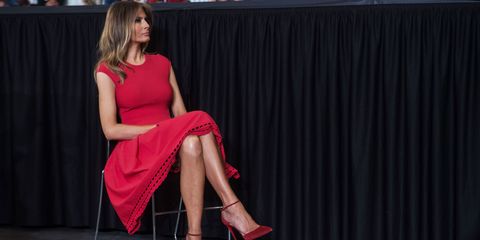 Donald Trump campaigned on a promise to overhaul America's immigration policy, and just 35 days into his presidency, he seems to be sticking to it. In fact the White House's new deportation guidelines are so strict that if he were president in the 1990s, his own wife Melania would have been a candidate for deportation.

The First Lady worked as a model in the States while here on a tourist visa, which constitutes a crime.

Trump's new deportation demands are a drastic expansion of the Obama administration's policy, which had focused on deporting only undocumented immigrants who were convicted of violent crimes. But the Trump administration's executive order targets people who have committed any crime, including anyone who has "engaged in fraud or willful misrepresentation in connection with any official matter or application before a governmental agency."

According to a report from Slate, two prominent immigration attorneys believe that this policy would apply to the first lady, whoworked as a model in the United States while she was here on a tourist visa in 1996. That's an immigration no-no (legally she would need a work visa, which she acquired a few months later). Though her lawyer issued a statement saying the documents were unfamiliar to him, he never actually said they were fake and never denied the allegation.

"If the current [rules] had been in effect at that time, then she would have certainly been an enforcement priority," Hasan Shafiqullah, deputy attorney at the Legal Aid Society, said in an interview with Slate. Another attorney, New York City immigration specialist Cheryl David, agreed: If Melania worked on her tourist visa, she "definitely violated her status, and if it came to immigration's attention...they certainly could put her into removal proceedings."