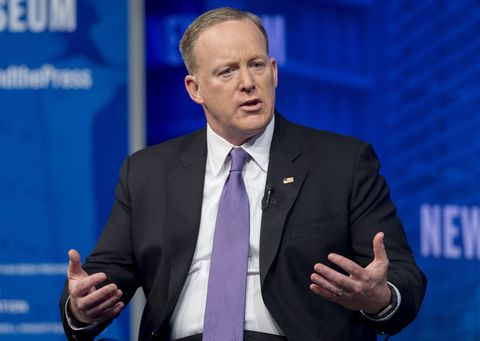 White House press secretary Sean Spicer caused an uproar on Tuesday when he compared Adolf Hitler favorably to the president of Syria. In an attempt to criticize Syria's Bashar al-Assad for a brutal chemical weapons attack he's believed to have ordered, Spicer said that Hitler "didn't even sink to using chemical weapons."

This is (of course) patently false; millions of Jews were killed in the gas chambers of execution camps during World War II. Spicer walked back his comments later on Tuesday, and on Wednesday morning, he called them "inexcusable" at a media event.

That hasn't stopped the many members of the public who are calling for his resignation. Here are some possible candidates to fill the role if Spicer steps down:

Hope Hicks was Donald Trump's press secretary while he was running for office and helped steer the campaign through many of its most controversial moments, so it wouldn't be weird for her to reprise the role. She currently holds the titles of assistant to the president and director of strategic communications in the White House. She began working with the Trump family in 2014, but the campaign was her first political public relations experience. Prior to Trump's announcement that he would run for office, Hicks mainly dealt with Ivanka Trump's clothing brand.

Katrina Pierson was a Trump spokesperson during his campaign and a key player defending Trump from October allegations that he sexually assaulted several women. She mounted a bold (if irrelevant) defense against accusations from Jessica Leeds, who said Trump groped her on a commercial flight in the 1980s. Pierson's defense centered on the armrests between seats in first class being fixed. Legions of fact-checkers tore her apart, but Pierson held her ground. It's been reported that Pierson is currently working for the pro-Trump non-profit America First Policies.

Perhaps the most obvious option is Sarah Huckabee Sanders, daughter of failed presidential candidate Mike Huckabee. Sanders is Sean Spicer's deputy press secretary, and she has been increasingly public since Trump was sworn in. A former political consultant who served as a field coordinator on George W. Bush's re-election bid and as a senior adviser for Donald Trump, she has the most political experience of the three. She was recently tasked with defending Trump's allegations that former President Barack Obama wiretapped him.

Trump has not yet given any indication that Spicer's job is on the rocks. But if Spicer departs, he definitely would not be the first member of Trump's administration to go.

This content is created and maintained by a third party, and imported onto this page to help users provide their email addresses. You may be able to find more information about this and similar content at piano.io
Advertisement - Continue Reading Below
More From Politics
Could This Be the Last Year of Roe v. Wade?
Meet the Next Presidential Pets, Major and Champ
Advertisement - Continue Reading Below
Who Is Jen Psaki, Biden's Press Secretary?
Bernie Sanders at the Inauguration Is a Whole Mood
The Inaugural Concert Was a Cheesy Balm
Read VP Kamala Harris's Inauguration Speech
No, There Is No Inaugural Ball This Year
Kamala Harris Is "Momala" to Two Stepchildren
Read Amanda Gorman's Moving Inauguration Poem
America's New Obsession: Amanda Gorman