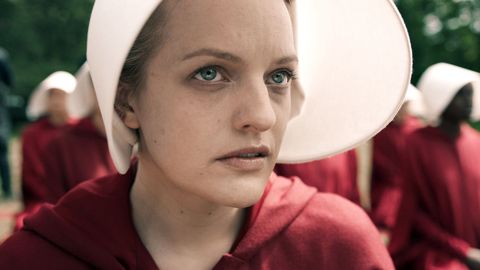 On Thursday, the House passed the American Health Care Act, the Republicans' plan to repeal and replace the Affordable Care Act, colloquially known as Obamacare. Not only would the new bill dismantle the ACA's popular protections for Americans with pre-existing conditions, but under the AHCA, pregnancy, postpartum depression, and rape would all qualify as pre-existing conditions.

As The Huffington Post points out, this means that the AHCA (which is still awaiting a vote from the Senate) would leave women especially vulnerable to higher premiums and potential denials of coverage.

This fact wasn't lost on American women, who immediately took to Twitter to point out the chilling similarities between the fears raised by the AHCA and the dystopian world of Hulu's popular adaptation of Margaret Atwood's The Handmaid's Tale.

Instead of our bank account, they're taking away our health insurance; and you thought Handmaid's Tale was just a fictional story. #AHCA

BREAKING: Season 2 of 'The Handmaid's Tale' currently filming at the @WhiteHouse. #AHCA pic.twitter.com/kFft11j4op

AHCA will directly punish women for their own rape / sexual assault / C-sections. Andddd we're one step closer to the Handmaid's Tale. https://t.co/px9E2fJURN

If you're watching Handmaid's tale, you might enjoy this photo of the real life "commanders". #AHCA pic.twitter.com/3Pf2VrlGjo

It's like the House of Representatives all watched Handmaid's Tale and said, "Let's do THIS." #AHCA

Kayleigh Roberts Kayleigh Roberts is the weekend editor at Marie Claire, covering celebrity and entertainment news, from actual royals like Kate Middleton and Meghan Markle to Hollywood royalty, like Katie Holmes and Chrissy Teigen.
Advertisement - Continue Reading Below
More From Politics
Jot Down These 2020 Voter Registration Deadlines
What the ACLU Will Fight For in the Next 100 Years
Advertisement - Continue Reading Below
Behind the Controversy at the Women's March
Women Are Not Granted Equality in the Constitution
Electability Is About Us—Not the Candidate
Everybody Running for President In 2020
Time’s Up for Wall Street
Women of Color Ruled Last Night's Debate
Cory Booker, Rosario Dawson Are Traveling Together
Door Knocking With Field Organizers in Iowa