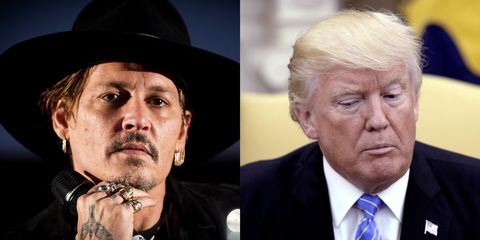 Johnny Depp is in the news again, and this time it's for some strange comments he's made about Donald Trump. While attending British music festival Glastonbury on Thursday to present a special screening of his 2004 movie The Libertine, Depp asked the audience, "When's the last time an actor assassinated a President?" Oh. Oh no. Johnny...

In the clip, shared by music magazine NME, Depp asked, "Can we bring Trump here?" Members of the audience shouted, "No!" which is likely in response to recent reports that Trump's state visit to the UK has been indefinitely postponed. One thoughtful audience member responded, "Just to give him some love and rehabilitation?"

Depp continued his speech about Trump by stating, "I think he needs help. I want to clarify: I'm not an actor. I lie for a living." While this last statement is meant to imply that he's not considering any acts of violence personally, it's a bizarre topic for the actor to bring up during his appearance in Britain.

According to People, the Secret Service is aware of the comments, but won't discuss an individual case such as this.

Depp's rant comes hot on the heels of the release of emails he sent to his former business managers, offering to sell "bikes, cars, property, books, paintings and some semblance of a soul left, where would you like me to start???" in order to pay of debts that run into millions.

Amy Mackelden Amy Mackelden is a freelance writer, editor, and disability activist.
This content is created and maintained by a third party, and imported onto this page to help users provide their email addresses. You may be able to find more information about this and similar content at piano.io
Advertisement - Continue Reading Below
More From Politics
In Conversation With Secretary Granholm
Laphonza Butler on What's Next for EMILY's List
Advertisement - Continue Reading Below
Anita Hill Believes We Can End Gender Violence
For Teachers, Going to Work Can Mean Life or Death
Want to Help Moms? Prioritize Menstrual Equity
Abortion Rights Start at the State Level
All of Your Abortion Questions Answered
The Texas Abortion Snitch Site Is Having a Bad Day
The Future of Afghan Women Depends on Us
How You Can Help People in Afghanistan