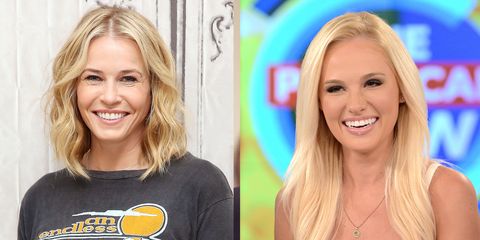 Comedian Chelsea Handler will debate controversial conservative commentator Tomi Lahren next month, in what's bound to be a "lively conversation" to say the least.

The Daily Beast reports that Handler and Lahren will face off during Politicon, the California-based political convention currently in its third year. There are a whole lot of issues on which these two women do not see eye to eye, but one of the most pressing is the 45th president—Handler has been a vocal critic of Trump, once predicting that his presidency would be "the end of our civilization," and led the Women's March at Sundance in protest of his inauguration earlier this year. Lahren, meanwhile, received a personal phone call from Trump to thank her for her support.

With that being said, the pair do share areas of common ground—both are staunchly pro-choice, and Lahren's stance on abortion reportedly got her fired from Glenn Beck's platform The Blaze.

Politicon takes place in Pasadena, California from July 29-30, with a lineup that also features a discussion between Handler and CNN's Jake Tapper.

Emma Dibdin Emma Dibdin is a freelance writer based in Los Angeles who writes about culture, mental health, and true crime.
This content is created and maintained by a third party, and imported onto this page to help users provide their email addresses. You may be able to find more information about this and similar content at piano.io
Advertisement - Continue Reading Below
More From Politics
For Teachers, Going to Work Can Mean Life or Death
Want to Help Moms? Prioritize Menstrual Equity
Advertisement - Continue Reading Below
Abortion Rights Start at the State Level
All of Your Abortion Questions Answered
The Texas Abortion Snitch Site Is Having a Bad Day
The Future of Afghan Women Depends on Us
How You Can Help People in Afghanistan
Andrew Cuomo Has Resigned as NY Governor
Gwen Berry: Athlete, Activist, Olympian
The Anti-Choice Endgame: Power And Control