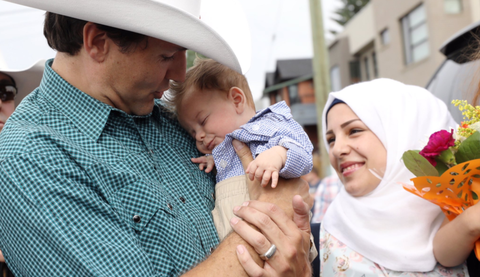 Justin Trudeau had the sweetest photo op on Saturday—and so did the prime minister of Canada. The two-month-old baby was named after the politician, because he welcomed his parents into the country. The CBC reports that little Justin-Trudeau Adam Bilal's parents, who are Syrian refugees, gave their child the name as a thank-you to the prime minister.

Afraa Hajj Hammoud and Mohammed Belal left Syria six years ago, and lived in Lebanon for three years before heading to Canada as refugees. After Trudeau became prime minster, the Canadian government let in tens of thousands of Syrian refugees. "I love him, because he knows what humanity means," Hammoud told the CBC.

Trudeau got to meet his namesake over the weekend while the prime minister was in Calgary, and Twitter could not handle the sweetness of the moment:

The smile and thumb grab says so many things pic.twitter.com/ZWCb9ic0zC

Justin Trudeau wearing a white stetson epitomizes the tough-good-guy-Wild-West-sheriff. Has your back in a fight AND believes in justice? pic.twitter.com/xYu00TejPf

And this isn't the first baby named after Trudeau. At least two other babies, born in January and February, were given his name. Here in the U.S., the number of babies named Barack peaked in 2009, but slightly declined after. No word on baby Donalds just yet, but here's betting it probably won't set a similar trend.