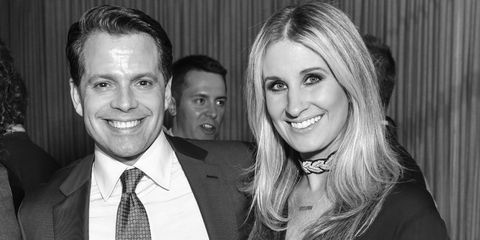 According to a new report by Page Six, Anthony Scaramucci's wife Deidre Ball actually filed for divorce on July 6, while she was still pregnant with the couple's second child together. Nine months pregnant, to be exact.

Ball reportedly gave birth to their son earlier this week, on July 24, while Scaramucci was at the Boy Scouts Jamboree in West Virginia, with President Trump. Page Six alleges that Scaramucci didn't actually meet his son until four days later, but that he texted his wife following the birth.

According to Page Six the text said, "Congratulations, I'll pray for our child."

Arthur Schwartz, Scaramucci's rep, revealed that neither party had been having an affair, and said, "The only one he's dating right now is the West Wing of the White House."

Scaramucci and Ball allegedly split around five months ago, but Ball filing for divorce less than three weeks before the birth of their baby is certainly interesting timing.

Amy Mackelden Amy Mackelden is a freelance writer, editor, and disability activist.
This content is created and maintained by a third party, and imported onto this page to help users provide their email addresses. You may be able to find more information about this and similar content at piano.io
Advertisement - Continue Reading Below
More From Politics
How to Help Black Lives Matter If You Can't Donate
Does Your State Have a Tampon Tax?
Advertisement - Continue Reading Below
What's Ranked-Choice Voting? Allow Us to Explain
Paid Leave for All Isn't Just a 'Women's Issue'
Yes, Caregiving Is Essential Infrastructure
Unforgettable Signs From the Protests
23 Ways Women Still Aren't Equal to Men
Ma’Khia Bryant: What We Know
Greta Thunberg Expertly Trolled Boris Johnson
The Hope and Heartbreak of Derek Chauvin's Verdict