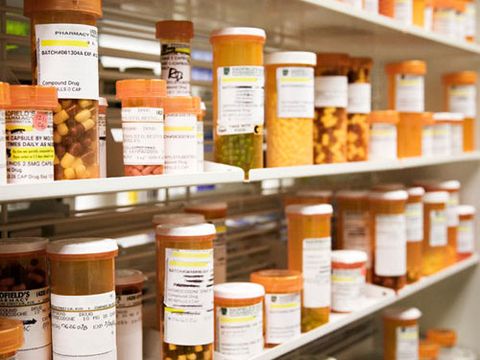 So, your finances are in free fall and you can't afford health insurance. Join the club: An estimated 87 million Americans—that's one in three people—have gone without coverage over the past two years, research shows. But how are you supposed to get your prescription antianxiety pills? A scary new trend finds people going to extremes to save money on pricey meds . . .

Insured patients are increasingly asking doctors for scrips for their uninsured pals. "I've had people ask me to write them for their friends or family members who have lost jobs," says Dr. Seth Feltheimer, a general internist at New York-Presbyterian Hospital in New York City. "I won't do it, of course, but the requests are growing."

Pill-poppers are now extending the life of their Rx tablets by chopping them in half. According to a Kaiser Family Foundation poll, 15 percent of people who regularly need meds admitted they'd taken a knife to their pills (or skipped a dose altogether) in the past year.

People are increasingly buying pain relievers on the black market—the pills are cheaper, and no prescription is required. One problem with this un-genius plan: Painkillers are addictive, so you can quickly become a junkie.

Women are freely bartering drugs like Ambien and Xanax. More than 36.5 percent of women ages 18 to 44 cop to getting meds from someone else, according to a 2008 study by the Center for Disease Control and Prevention. The caveat: You're not a doctor!

Women are more worried about their wallets than their health, with 45 percent of us skipping doctor visits or meds in 2008 for financial reasons, according to a study by the National Women's Health Resource Center.

Jihan Thompson Jihan Thompson is a freelance writer and entrepreneur based in New York.
Advertisement - Continue Reading Below
More From Politics
How Planned Parenthood Is Responding to COVID-19
British PM Boris Johnson Has Coronavirus
Advertisement - Continue Reading Below
Fear Is a Virus
COVID-19 Exposes the Dangers of Gender Inequality
“I’m Homeless—How Can I Self-Quarantine?”
Will the Conventions Be Canceled in 2020?
Rep. Katie Porter on Being an Effective Politician
Time's Up CEO Reflects on the Weinstein Verdict
Everybody Running for President In 2020
Warren Has Dropped Out of the Presidential Race