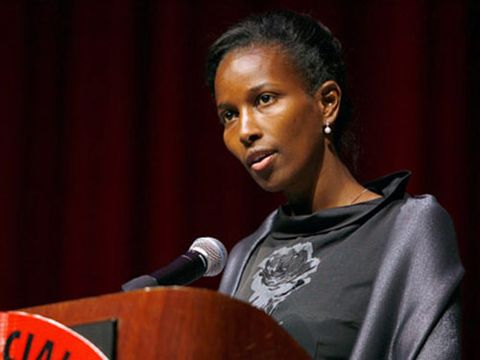 Q: You made a short film with Theo van Gogh, called Submission, that featured Koran verses written on a woman's torso. After it aired on Dutch television in 2004, a radical Islamist impaled a written threat against your life on a knife plunged into van Gogh's body. Did you have any idea the movie would provoke a lethal response?

A: I thought it was going to provoke discussion and debate, but I didn't expect a murder. I live with the threat, and especially with the feelings of guilt about Theo, thinking that I should have been much more prudent. Then again, through out the history of Islam, many people who wanted to change anything were threatened, exiled, killed, humiliated, locked up, or called mad. So there's this permanent stagnation of thought-nothing progresses. Submission was not worth a human life. I have learned that the best thing is to go on doing what I'm doing, but more carefully.

Q: As a Somali-born member of the Dutch parliament, you spoke out about how Islam violated women's rights.

A: People were hearing immigrants say the same thing [about assimilation] over and over. I said, "Certain things about Muslim culture, the way we treat our women and practice our faith, make it difficult for us to assimilate into Dutch society." It caused a huge commotion, which I have not been able to recover from in Holland.

Q: In Infidel, you write about your grandmother overseeing your genital mutilation in Somalia when you were 5. Was this typical for little girls there?

A: There are 6000 girls mutilated every day; according to the U.N., 135 million girls have been mutilated. Those who practice it see it as cleansing. I try to explain in the book how my grandmother believed she was doing us a big favor.

Q: In the Netherlands, as a refugee from a forced marriage, you gradually discarded Muslim attire and, at 22, bought your first pair of jeans. Howdid that feel?

A: Like jumping to the top of Mount Everest. On one hand, I thought I was sinning and would end up tortured in hell-if I put on jeans, or uncovered my hair or any part of my skin, I might drive strange men into a frenzy. On the other hand, I'd be able to ride a bicycle.

Q: What do you say to Muslim women who fight for the right to wear the head scarf?

A: I say that's fine-unless you impose your personal choice on others. If you wear the veil, the message you convey is that you're superior to women who do not, because you're saying they are whores. You're also saying men are incapable of sexual self-restraint, and that if they see women who are partly covered or not veiled, they will react like my grandmother's he-goat.

Q: Do you feel that certain customs and behaviors-arranged marriages, honor killings, domestic violence-are so entrenched in Islam that one must renounce the religion to change them?

A: Not renounce it, but just recognize that these cruelties are symptoms of some dogmas within the religion-for example, the dogma that premarital sex is prohibited and should be punished by flogging. If we recognize, like secular, liberal Westerners, that sexuality is not so mystical and not so complicated, we could make the faith more humane.

Q: You currently live in Washing ton, DC, with armed security, and work for a conservative think tank. Do you think you'll ever move back to Holland?

A: I want to live here. In the U.S., you have this environment where anything is possible. Not perfect, but possible. It gives me a lot of energy.