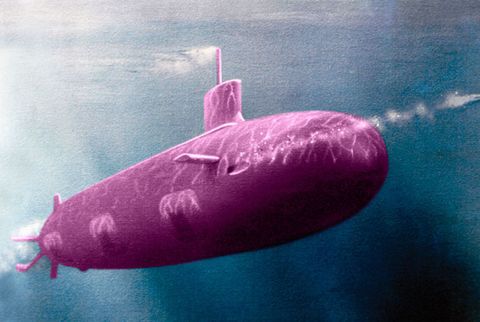 This fall, for the first time in history, women in the Navy are headed for the nation's elite submarine service. Twenty-four women will board eight ballistic-missile and guided-missile attack submarines — a historic step, but also a controversial one in the eyes of some seamen. One retired male Naval officer has launched a petition, gathering 600 names of past and present military personnel, as well as some spouses, opposing the move. Space is tight on the subs, critics say, and women might bump up against men in the corridors, causing sexual tension and harassment. But the women are up for the challenge ahead, says Jacqueline DiRosa, the first woman ever to serve as Fleet Master Chief, the second-highest position in the Navy. We asked the recently retired DiRosa what these women's lives will be like under the waves.

How do people prepare mentally and physically for this job?

The training is quite extensive—it can take 18 months or more. There is a huge investment of time and resources put into these personnel. They go through all kinds of preparation—learning damage control, training in nuclear propulsion. But first you have to pass a very rigorous mental screening process. You have to be very mentally stable because these deployments are quite unique. Space is tight. It's not like every day you can come up for some fresh air.

There will be three women on each of the eight subs. How many men will be aboard?

The crew size is roughly 250. So there is going to be a very small percentage of women compared to men on board.

Yes, you have your own personal sleeping quarters, called a rack. It's basically a little bigger than a coffin. It's maybe two-and-a-half feet wide.

That's your only private space—the coffin?

Yes! For the most part, you will have your own rack; there are several racks in a room, and the rooms are small. The women's racks will be separate from the men's.

Who are these women going aboard the submarines—how did they get the gig?

They are mostly recent Naval Academy grads, along with a few senior officers who will go on board as mentors for the younger women. This is a new opportunity in the Navy, and it is going to come with some challenges: Not everybody's going to be there with wide-open arms, although I think overall it's going to be very positive. One young lady who I talked to told me she was excited and motivated, and she gave me the sense that she wasn't going to let anybody take this opportunity from her. I think all the women realize this opportunity is really going to set the tone for future groups. There's a lot resting on their shoulders, and I think they realize that.

Opponents point to potential sexual harassment. What do you say to that?

I would say the leadership needs to set the tone, and everybody needs to understand that you're part of a professional organization and professionals don't treat each other unprofessionally. There are always going to be men out there who are going to try you as a woman to see: How far can I push you before I break you? And if something happens to our women going on board and they don't act or say something and stop it, then that's when that cancer grows. Leadership can't act on something unless they know of something. As soon as leadership finds out, we deal with it. So I'm not personally concerned with that.

Can people email friends and family from a submarine?

Email is very limited. Submarines do not have the capabilities to communicate as a surface vessel can. And a lot of times, when a submarine goes on deployment, you don't know where they go. External communications can provide vulnerability. Those operations are very secure and kept secret because it's all about national security. People are able to get letters when they pull into a port, but the delay could be so great—if they are submerged for 60 to 90 days or so at a time, they are not pulling into port anytime soon. Communications are very limited.

So submariners might not know where they're going before they head out?

Some people don't know until they've left the pier. Depending on what the missions are, it can be very secretive. There is a reason it's called the "Silent Service." Being on a submarine is a unique part of our Navy service. From my observation, folks who do it, love it. Among submariners, there is a unique bond. It requires a special type of person.

Is there a gym on board?

There is workout equipment, and depending on how the submarine is configured, you will find a couple treadmills or stationary bikes in some places—wherever space will allow. There is not necessarily an exclusive room for equipment. You don't have the luxury of that.

Usually the food is pretty darn good. One of the most important things to any deployment, whether it is on a ship or a submarine, is food. If the food is lousy, it impacts you mentally. And that impacts you physically—it's all connected. There's usually a small crew that does the cooking, and they're well trained. Never have I heard a submarine crew not eat well.

What do people do for fun?

People will bring games on board—they'll bring personal devices with video games and movies that they'll watch in their rack. But you've got to realize, there is not tons of time off. And also, you have to limit what you personally bring on board. You can't bring a bunch of extras. You better learn to fold your clothes well, to maximize the space you do have!

The only hurdle left for women in the Navy is to become Navy Seals. Can that happen?

Yes, the Special Forces. I think it will happen—it's just a matter of time. It's my opinion that there is a place for women in Special Forces because right now, when I look at the current war situation that we are in, women have the opportunity, I believe, to gather intelligence and to get to places that our men cannot. We do have women who serve in some support roles with our Special Forces, but they are not considered special operators, if you will. Our Navy Seals are phenomenal in what they do, but I think there are opportunities there that some of our women could do extremely well. Will we have a lot of women who would seek out that type of military career on assignment? Maybe not. But does that mean we close those opportunities up? No. I think we make the opportunity available and then see who comes knocking at the door.

Abigail Pesta Abigail Pesta is an award-winning journalist who has lived and worked around the world, from London to Hong Kong.
This content is created and maintained by a third party, and imported onto this page to help users provide their email addresses. You may be able to find more information about this and similar content at piano.io
Advertisement - Continue Reading Below
More From Politics
Want to Help Moms? Prioritize Menstrual Equity
Abortion Rights Start at the State Level
Advertisement - Continue Reading Below
All of Your Abortion Questions Answered
The Texas Abortion Snitch Site Is Having a Bad Day
The Future of Afghan Women Depends on Us
How You Can Help People in Afghanistan
Andrew Cuomo Has Resigned as NY Governor
Gwen Berry: Athlete, Activist, Olympian
The Anti-Choice Endgame: Power And Control
Give Domestic Workers the Protections They Deserve