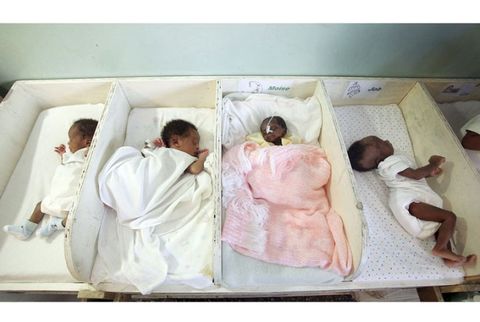 On the heels of the devastating quake that claimed more than 200,000 lives in January 2010, Haiti experienced a population spike, with the birth rate tripling in urban areas within months. But it's been hard to find many ecstatic dads pacing delivery rooms. A shocking number of these newborns have been the products of rape.

According to new data, rampant sexual assault continues to plague the country's women and girls, especially those living in the overcrowded displaced-persons camps that dot the capital of Port-au-Prince and surrounding areas. Since the earthquake, some 1,000 rape cases have been documented in 22 of the 800-plus camps, according to the advocacy group Commission of Women Victims for Victims, or KOFAVIV. (Because the majority of rapes go unreported, this is just a grim snapshot.) In another sickening finding, of 2,000 pregnant adolescent girls surveyed by PotoFi, a global coalition of Haitian women, 64 percent said they had conceived through rape.

The camps are unsafe due to inadequate lighting, lax security, and tents that are too easy to access. Adding to the lawlessness is the breakdown of the family structure, say aid workers. "The men don't have jobs, and they smoke pot and drink," explains Malya Villard-Apollon, a cofounder of KOFAVIV. "When they're high, they act on their frustrations."

KOFAVIV has recently organized brigades of men and women who patrol camps at night armed with flashlights and whistles. The group is also teaching women how to navigate Haiti's byzantine justice system should they decide to pursue action. (To make a rape arrest, the police require the victim to get a certificate proving she sought medical treatment within 72 hours — a high bar for women who are essentially homeless.)

Also attempting to improve conditions, the U.N. has set up police stations in the seven largest camps and has installed hundreds of solar-powered lamps. And Villard-Apollon notes that some 40 men have been arrested for sexual assault, among them a police officer who raped a teen. To much of the world, that might seem like scant progress, but in the camps of Port-au-Prince, that's 40 fewer men to have to survive on the way to the bathroom at night.

WHAT YOU CAN DO

Donate $30 to the Commission of Women Victims for Victims' parent organization, MADRE (madre.org), to provide solar flashlights and whistles to five women.