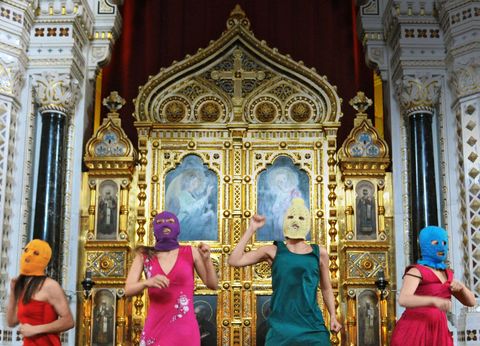 ON FEBRUARY 21, 2012, five women in brightly colored dresses, tights, and balaclava masks walked into a cathedral in Moscow to stage a "punk prayer," calling on the Virgin Mary to free Russia from Vladimir Putin. The world now knows those masked women as Pussy Riot, the Russian feminist punk rock group. (Three of the women were later arrested, put on trial, and sentenced to prison for "hooliganism.") Masha Gessen, a journalist who lived in Moscow for 20 years, had unprecedented access to the women—they even wrote her letters from jail—and charts their journey from budding punk activists to freedom fighters in her new book, Words Will Break Cement: The Passion of Pussy Riot (Riverhead).

MARIE CLAIRE: You've said the arrest of some members of Pussy Riot was pivotal. Why is that?

MASHA GESSEN: The arrest was completely outside the scope and scale of the reactions we'd encountered in Russia. With few exceptions, we had not seen people going to prison for peaceful protests. Now there are about 70 political prisoners in Russia—a majority of them arrested after Pussy Riot.

MC: Let's talk about Nadya Tolokonnikova, 24, whom you portray as the soul of the group. How was her time in the penal colony?

MG: She was made to work extremely long hours and was incredibly sleep-deprived and underfed. She eventually went to the warden and demanded he bring prison conditions in line with the law. He threatened to have her killed. That's when she decided to go public and to go on hunger strike. She became very, very ill. She was hospitalized. And then she disappeared for 26 days. At this point, the great news is she's alive.

MC: What do you make of Putin's amnesty, which grants freedom to women who have small children, as the Pussy Riot members do?

MG: It's transparently cynical: They may get a month or two shaved off their sentences [they were set to be released in March] just so they can be out before the Olympics. On the other hand, even one less day in a Russian prison is good news.

MC: Let's talk about you, too. Why did you leave Russia in December? I understand as a lesbian and as a parent, you no longer felt like you could live there.

MG: In the past year, there has been a large number of very restrictive, very scary laws that have created not just a chilling effect but an atmosphere of absolute hopelessness for many Russians. One of the proposed laws would take custody away from any parent "who allows for nontraditional sexual relations." That's personal. It will affect a lot of people, but the sponsors of the bill have made it clear this one is for me. That's when you have to admit defeat. If you're going to go after my kids, I have to leave. You win.