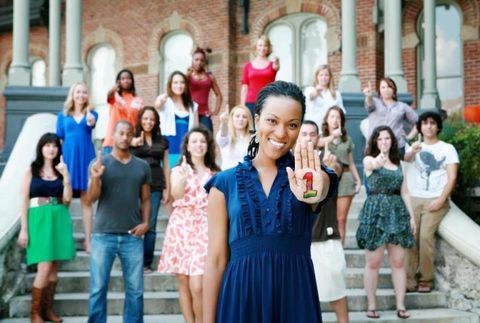 Courtesy of One Student

For University of West Florida Graduates Becca Tieder and Kelly Addington, out of a lot of bad came even more good. The two women have been fighting sexual assault at colleges and universities for over a decade. Their work began following Kelly's personal experience with sexual assault on their own campus. The two were both informed members of their student body, sorority women, and student leaders, but despite their heavy involvement in their campus community, but they realized that they didn't know where to turn to get help.

While Tieder says that their university was helpful in the wake of Kelly's assault—unlike the all too common horror stories of sexual violence reports caught in a black hole of red tape by a school's administration—they realized that this lack of knowledge about where to turn after facing this kind of trauma couldn't be a sentiment felt by them alone. "When we realized how much trouble we had finding resources, we thought that other people might be having the same problem," Tieder says.

Addington and Tieder gained ground and publicity for their work grew on their own campus, and they were soon invited to a neighboring university to share what they were doing. Since Kelly's assault over ten years ago, the two women have spearheaded the creation of a number of organizations combating sexual violence on college campuses, and taken their mission across the nation.

Underneath the umbrella of Addington and Tieder's many programs combating sexual violence on campus is One Student. The organization was founded in 2010 in order to give students a way to engage in social change and address sexual violence. In essence, Tieder says, they are a support group for universities, student groups, or even individuals, to create programming that deals with sexual violence on campuses across the nation.

The two women understand this type of programming well: They've visited over 400 campuses to spread their message. On their early campus visits, Addington and Tieder's messages about sexual violence were met with not only positive reactions from students they met with, but had inspired students who wanted to do more to combat sexual violence on their own campuses. In response to these demands, the two started created campaigns of posters and videos that they'd give to universities and colleges to use to spread their message. "We just wanted to create good stuff and put it out there," Tieder says.

Today, Tieder and Addington continue their work supporting the spread of discussion and programming surrounding sexual violence. Their campaigns tackle issues such as defining consent, being an engaged bystander, and victim blaming. These campaigns aren't just about education, but teaching students and universities how to be the educators themselves. Additionally, they help sponsor 'One Student' days on campuses and do work for Sexual Assault Awareness Month. And One Student isn't the only way they're making an impact—they also have started chapters of No Woman Left Behind, a bystander initiative, and a program for parents of adult survivors of sexual violence. "A huge part of our outreach is parents saying, 'I want to help my kid, I just don't know what to do or say,'" Tieder says.

Their impact is huge—the two were recently invited to the White House for one of the listening sessions in preparation for the task force, as well as to meet with Vice President Biden. Although they've had incredible experiences like the White House visit throughout their work, touching people on a personal level has been one of the biggest highlights. Tieder and Addington saw this first hand during their visit to Vice President Biden's office, when they were reacquainted with a woman who had seen them speak at her university two years prior.

"She said, 'I want you to know, you came to speak at my school, and at that point, when I heard you speak, it changed my life. You made me realize that I was a survivor,'" Tieder recalls. "I'm sitting in the White House, in Vice President Biden's office, and this beautiful student that was making all these wonderful choices said that we played a role in her process? That was pretty miraculous."

Diana Pearl Producer Diana is a producer at ELLE.com.
This content is created and maintained by a third party, and imported onto this page to help users provide their email addresses. You may be able to find more information about this and similar content at piano.io
Advertisement - Continue Reading Below
More From Politics
Gwen Berry: Athlete, Activist, Olympian
The Anti-Choice Endgame: Power And Control
Advertisement - Continue Reading Below
Give Domestic Workers the Protections They Deserve
Kristin Urquiza Wants Justice for COVID-19 Victims
A Breakdown of VP Harris's Net Worth
WH Announces Removal of the Hyde Amendment
What Liberation Means This Juneteenth
Kathryn Garcia: It's Time to Step Up or Shut Up
A Valedictorian Speaks Out Against Abortion Bans
Standing Between Care and Violence