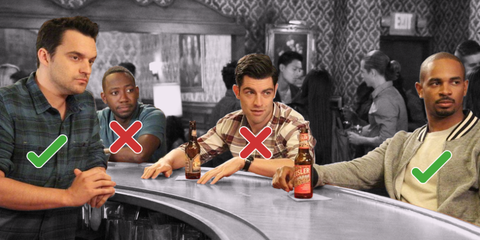 A recent scroll through Instagram revealed a cool mural painted by a friend named Maggie. I started to tap out a comment, then paused—I realized I hadn't spoken to Maggie since I broke up with her friend Jacqueline. Is it weird for me to comment on my ex's friend's Instagram?

These are the questions of our time. Before 2004, a breakup meant that two people went their separate ways. You deleted each other's numbers from your RAZR phones and called it a day. If you ever happened to run into a friend of your ex's on the street, you would make polite small talk, maybe inquire about the ex, mention that you're doing amazing thanks, and then leave it at that.

These days, you only need to date someone for a few months before you wind up beFriending (if you will) their entire group. The longer you date, the likelier you are to connect with their whole network on Instagram, Snapchat, Twitter, and so on. It's just the way the world works.

So what happens when you break up with the central member of that group...but still have lingering connections to—and maybe even like—its members?

There's no road map for navigating this stuff. Or there wasn't, until now.

Ponder why it is you want to stay connected to this friend in the first place. Is it because you're feeling ever so slightly revenge-y and know hanging out with his friends will annoy him? Or is it because his roommate's girlfriend gave you amazing advice at their house party and you want to take her to drinks to thank her? If you had a genuine connection with the person—and already shared late-night texts and early-morning gchats—it's not all that different to keep at it.

We could examine how truly bizarre it is that you need a breakup "strategy" online, but that's for another day. Because it's public, and because your ex will see it, it's best to just hold back a teeny bit for the first few months after a breakup. Liking a photo? Sure. Sharing celeb news on your ex's friend's wall because LOL REMEMBER WE WERE JUST TALKING ABOUT MILEY CYRUS? Eh.

Reconsider that urge to unfriend them all en masse. It suggests you're enraged, upset, dramatic—or just mean. And fine, if you're going to do it no matter what, just do it a little bit at a time. Unfriend whoever shows up in your feed at any given time—but don't hunt them all down to do it all in one great big purge.

Duh, right? But if you've ever felt more than a passing attraction to one of his friends, it's hard to keep your mind from wandering after the split. Just...don't. Too messy. They know too much.

Even if you haven't felt an attraction in the past, alcohol has a way of manufacturing some sparks. Throw a few drinks into the mix while you're hanging out, then add in a good-night hug that lingers one second too long, and you're on your way to the Real World.

If you're sad about disconnecting from your ex's giant group of buddies (no more Taco Tuesdays?!), you gotta suck it up and move on. Part of a breakup is saying goodbye to the life you had together, including routine social events. You can't pretend that nothing has changed, because it has.

It's hard to pretend the person doesn't exist. Your ex is the glittering pink elephant in the room. If you don't mention him, though, the friend probably won't bring him up on their own. Unless of course they're trying to test you as some sort of reconnaissance mission, in which case, ABORT ABORT ABORT. Don't complain about him, don't inquire about him, and certainly don't try to turn the new friend against the ex. Moving on to an ex-less land of friendship is the best—and only—way.