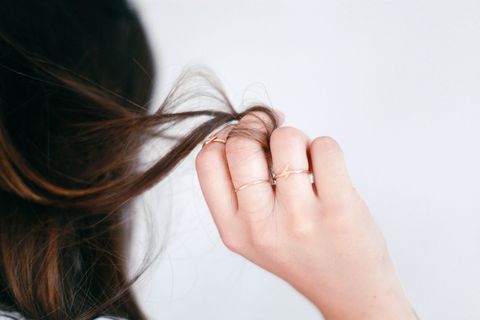 At a pre-conference happy hour, getting tipsy off of free cucumber-and-strawberry puree cocktails, I'd been playing with the silver and turquoise band I wore on my left ring finger. A woman who was also presenting at the conference was telling me about her decision not to have children. As I twisted the ring, I noticed it fly under a table. I'll get it in a minute, I thought.

As the conversation moved through a second cocktail, I became so engrossed that I forgot about the ring—along with my boyfriend, who'd been texting me outside, wondering whether he was allowed to come in.

When I finally met up with him for dinner at an Indian restaurant a few blocks away, I realized I'd forgotten to pick up the ring.

"Whatever you want." His standard answer.

I was hungry and still a little drunk, and decided it could wait.

Over bhindi bhaji and veggie pakoras, I wondered aloud, as I tend to, whether it was a Sign. "What do you mean," he smirked, "a sign that we should get engaged instead?"

I raised my eyebrow, the only response that felt appropriate to his half-serious, half-mocking proposal. Jesse and I met less than a year ago. I knew he didn't want to get married. But I also knew he wanted to end up with me.

I had begun to think more personally about engagement when I went back to California for Christmas break and saw my friend Lauren, the first among my high school friends to get engaged. I examined her ring. It was an expensive, tasteful diamond—the kind you might see on a woman who only owns nice things, but doesn't like to rub it in your face.

"Do you mind if I try it on?" It was so sparkly it reminded me of playing Pretty Pretty Princess, only higher stakes.

It was so sparkly it reminded me of playing Pretty Pretty Princess, only higher stakes.

"Of course," Lauren said in her casual way, meant to translate as You think I care about this crap? This landed on my hand mostly by accident. It's the matter-of-fact approach to life that had made me fall in platonic love with her at 16. Her midwestern-inherited pragmatism always seemed to yield the results my particular brand of Annie Hall-inspired romanticism failed to. I wanted true love, sure—but that wasn't enough. I needed my fairytale to be original and roundabout, a work I wrote myself.

I slipped on her ring. It looked and felt...wrong. I imagined myself immediately poking someone's eye out. Probably my own.

"It's beautiful," I said, meaning it but glad to hand it back to her, along with the concept's distant future. I'm different, I thought. I don't think about getting married. I don't want a ring.

That was, until I arrived back in New York to the dregs of a long, drawn-out breakup. The kind where I got high every other night and saw jazz alone to "process"; the kind where I created an OKCupid profile at the end of our "break" just to remind myself I had options.

On one of these nights alone, I went through my jewelry box. The daughter of an antique dealer, I have a collection many women would envy, but, naturally, since my mother had curated it, I'd taken to wearing none of it. Save for a couple chunky silver rings, none of them suited me—until I noticed a ring I'd picked out from my mother's collection so long ago that I could pretend I'd bought it myself. It was a small silver band, with five vertical turquoise rectangles, lined up neatly like dominos.

I slipped it on my ring finger and it just felt...right. It didn't belong to my mother, or my soon-to-be ex. It was mine.

The author and her engagement ring.
Courtesy of Rachel Krantz + Katja Cho

That was the night I decided I would become engaged to myself. I would be the partner I'd been waiting for, the ideal person every man I'd dated had failed to live up to. I'd learn to give the stability I sought in others to myself. I'd be single and betrothed, alone but not lonely. I'd be Eat Pray Love-ing it in no time.

When I gave my soon-to-be ex a back rub with the new ring on my finger, he didn't comment on its appearance. My resolve deepened.

I came to rely on the weight of that ring as we broke up. I enjoyed the light presence of it on my finger; the way it gave me reassurance that wherever I go, there I am. I liked the idea that I could gift myself whatever sense of security an engagement ring could provide, that I didn't need a man to put something on my finger, that I didn't have to care if I appeared "taken" or not.

And then, in practically the same smug breath, I met Jesse, and the ring began to take on other meanings. When he asked me about it, I told him matter-of-factly that I was engaged to myself. But privately, I began to imagine the ring had magical powers—that I'd willed him into my life with it; that this man I'd somehow moved in with within weeks was the result of a spell the ring had cast, or if not a spell then something closer to a tip from The Secret.

Sometimes, when I was angry or restless, I'd slip the band onto my middle finger. But just like any fights we had, that never lasted long, and it ended up back on the finger it fit best. I twirled it. I sometimes chewed on it when I was nervous. I felt it lock around my finger when we held hands.

I'd be single and betrothed, alone but not lonely. I'd be 'Eat Pray Love'-ing it in no time.

Jesse told me on our second date that he'd been married before, for only a year, back when he was about my age. I later found out he'd kept the ring; why, I'm not sure, since he mostly regarded the whole thing as an amusing mistake, made nearly a decade in the past.

One night, I surprised myself by asking him to put it on while he kissed me. The taboo and domesticity of the role-play turned me on. It was like sleeping with a stranger; the traditional silver wedding band made him look like a cow with its ear tagged. It emasculated him somehow, and yet, when I saw him grab my thigh with it, I felt I was sleeping with him in another life, one I was deeply ambivalent about. He was always happy to indulge the fantasy, but would slip it off before he went to take a shower, like it was just more post-coital residue to clean off.

But then I began to daydream about being tagged. When he floated the idea of a domestic partnership for practical reasons, I heard myself answer, nearly out-of-body, that I'd want some jewelry. I'd never wanted so badly to be possessed. At the same time, I'd also never been so afraid a man would manage to pull it off.

So my ring remained. Back at dinner, I was still undecided. "What do you think it means if I go back and get it? What if I don't?"

Jesse smiled. "Maybe it means nothing either way. Maybe it just symbolizes a new era of not having everything symbolize something."

As we went to get coconut ice cream in the opposite direction, I left the ring back on the bar's floor.

In my newest fantasy, I imagine a young woman finding it on the floor, impulsively deciding to slip it onto her finger instead of returning it. I hope she finds the same comfort in it, that it wills the partner she's always deserved to appear, or that it carries her through times when that partner is nowhere to be found. Either way, I hope it helps her become that partner for herself.

I then see her dropping the ring in a different place, and the cycle repeating, part of a chain that started long before me, long before my mother found the ring at a yard sale. Its power only compounds.

But then, I remind myself, it's just a ring.