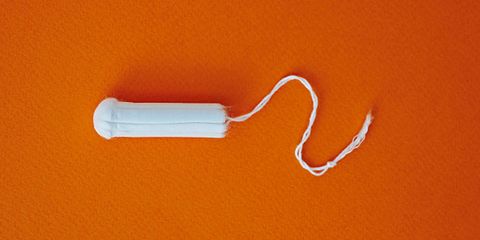 I was never into getting my "red wings" until I met my college girlfriend. She was—college guy's dream—into very kinky things I had never considered. That included sex on her period.

When she first suggested we try it, I admit I was reluctant. It took a bit of coaxing to convince me. But what I realized was that, potential grossness aside, it ultimately just meant we could have more sex, so I went along for the ride.

"It was an incredible experience—so primal."

One day she asked me to go down on her. It was an incredible experience—so primal. And then finally we went all the way. Her juices and my juices mixed together and it felt amazing. Afterwards, she licked everything off me.

Now, years later, I'm a 30-something mechanical engineer—or "enginerd"—who's looking for women who share the same fantasies. I was lucky to find one in my current girlfriend Lisa. This time, I was the one who had to do the coaxing—Lisa says most men won't touch her during her period. I'm the first man she's met who finds that time of the month the biggest turn-on—the sight of the blood, the texture, the smell, everything. I just want to be completely consumed by it.

I even suggested filming pornographic videos of us as a way to prolong the enjoyment. My favorite is the one where she was wearing a Diva Cup: After we got started, I took her Diva Cup out and used the blood to finger-paint all over her body. Something about the contrast of the red blood on her fair skin was intensely erotic, as was painting messages like "I love you" on her body. We even used her period blood as lipstick, and I kissed it off her lips. Lisa especially loves it when I leave a bloody handprint on her; she says it's hot to see her blood in my facial hair when I go down on her.

"I think the right man would find all of a woman's body sexy—not just when it's convenient for him. "

But one of the things that turns me on most is the change in the way a woman's vagina feels during her period. It's more swollen and sensitive. It makes her more responsive. I love when Lisa calls me and tells me she needs me because she's cramping—she asks that I come give her relief, because orgasms help relieve the cramps. Not to mention that her libido is in overdrive during this time.

Our ultimate period fantasy is to find another couple that we could trust and swap with during cycles. Maybe someday.

To each their own and all that, but when it comes down to it, I think the right man would find all of a woman's body sexy—not just when it's convenient for him.