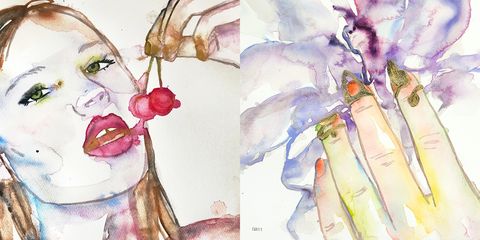 Watercolor artist Fahren Feingold’s newest series "Golden Touch" is sensual and delicate—so delicate, some of her shapes slip into inky shadows. There are fingers dripping in gold and touches of pastel. One figure is a wash of blues and pinks, a few hazy lines denoting her waist and thigh. The series focuses on an aspect of femininity often discussed in hushed tones: menstruation.

The name “Golden Touch” is a reference to the gilded fingertips in each painting, whether on nude figures or close-up hands. Rather than painting fingertips dipped in crimson blood, Feingold changed the coloring to gold—transforming shame into celebration. “You’re always hiding your tampons, like it’s a secret. There’s such a stigma,” she says. “I wanted a dialogue about not being so ashamed of that.”

The L.A.-based Feingold was particularly inspired by the ritual practice of Mehndi, which uses henna to tattoo designs onto hands. While henna tattoos have become a carnival attraction, there’s a deep symbolism in the ancient technique. “It’s such a beautiful tradition, so I was really interested in the history of it,” Feingold says. “And when I looked more, I was surprised to see the origin. It was really about cleanliness and that you were done with your period and warding off the evil eye.”

The idea of becoming "impure" during menstruation is not limited to Mehndi—it runs throughout many cultures. Feingold cites a commonly held Japanese myth that a woman’s hormones affect her ability to properly taste, thus preventing women from becoming sushi chefs. In Judaism, the mikveh, a ritual bath, is used by Jewish women to achieve ritual purity after finishing menstruation or giving birth.

Amid the connotations of dirt and impurity surrounding women’s natural cycles, Feingold wanted to show the reverse. “I wanted to turn that around and say this is something women have ownership of and we have power,” she says. “We should be talking about it like purity, and godliness, and gold.”

Inspired by Mehndi, Feingold decorates the hands beyond the drops of golden blood, adding rings and pearls. “I want to celebrate the fingers and the hands touching everything,” she says. Indeed, several works show a hand dipping fingers into the pollen of a flower, sliding into a gold-filled mouth, or touching a sliced lemon.

“I was experimenting,” she says, not having painted fruit or jewelry or fish before (“The fish [feels] like holding a male member a bit—it just felt interesting as a juxtaposition,” she says). “I wanted to try to be less literal. Fruit and flowers obviously can be used to represent female genitalia and life just as much as body parts. So I was using different objects to play around with that.”

Maintaining a sense of novelty and freshness in her watercolors is at times difficult, she admits. Her next series will debut at the always hotly-anticipated Art Basel Miami. The paintings that have gained her a reputation—her softly painted nudes, with Fauvist colors, are so distinctive in style it’s hard to imagine she’ll do anything else.

But she’s going to try. “It starts to feel mechanical,” she says of repeating the same subjects. “It feels a bit like you’re an illustrator just making work to keep in line with a style. And I don’t want that.”

You can see more of Feingold's work on her Instagram page. The series, which will be exhibited online and live as an Artsy exclusive with The Untitled Spaceon Sept 17th, focuses on an aspect of femininity often discussed in hushed tones: menstruation.