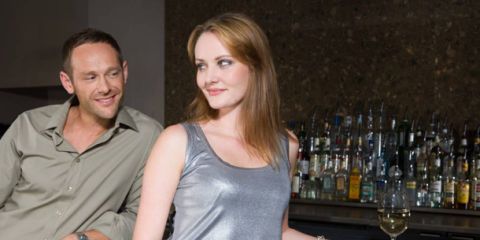 #1: HOW TO "MIRROR" SOMEONE YOU'RE HAVING A FUN FLIRTATION WITH

ME: In you book, you say a person mirror his or her date's movement if he/she likes her/him. Can you tell us how to "mirror"?

JUDY: Mirroring your date's movements—a practice known as the chameleon effect—conveys that you two are on the same wavelength, which can enhance your rapport. So if your date crosses his legs, cross yours. If he takes a swig of his drink, sip yours. Or, just ask your date to dance. Dancing forces you to mirror each other's movements, which is why it's such a surefire romantic mood-setter.

#2: THE GESTURE THAT WILL MAKE SOMEONE WANT TO CUDDLE WITH YOU

ME: Wow! Cool! Who knew there was a science to the dancing thing!

You also say, in your book, that "aw, shucks" gestures—like shrugging or turning up your palm—are good in a flirty situation. Why's that?

JUDY: One goal of flirting is to advertise your friendly intentions. An upturned palm is a way to say "I have nothing to hide." (In ancient times it probably meant "I'm not holding a rock to throw at you.") Shrugging your shoulders, a gesture known among biologists as the "cute response," crops up unconsciously when we see babies or puppies. It essentially says, "You're cute! Let's cuddle!" And that works wonders in a dating scenario as well.

#3: GETTING INTO SOMEONE'S PERSONAL SPACE--IN A GOOD WAY

JUDY: The bubble of air eighteen inches around someone's body is their "intimate space"—a no-go zone when you first meet someone. To test the waters and see if someone's up for you breaking through this barrier, find an excuse to step briefly into this zone—say, by allowing someone behind you to pass, or to grab an appetizer off a wandering tray—then step back out again. If this person is drawn to you, he or she will respond by stepping in closer after you've backed off.

ME: Let's say you are flirting with someone and you want to take things up a notch without coming on too strong. Should you touch the person in question? Where is a good place to touch? I'm going to go out on a limb here and guess that anything below the belt and above the thigh is not such a great idea.

JUDY: Right! One safe option is to touch someone's forearm or elbow—it will seem friendly, but not too friendly. In one experiment where waitresses were asked to touch customers' forearms while handing over a menu, these waitresses received much higher tips than those who didn't touch the forearm. This suggests that touch magically warms people up to your presence.

ME: Finally... I noticed a study mentioned in your book about how it's not just men who look at boobs. As it turns out, ladies will often sneak a glance at men's private parts! Really?

JUDY: You bet! Women are just better at hiding the fact that they check out the goods on a guy. This is due to their higher powers of peripheral vision. Typically, women's peripheral vision extends 45 degrees to the sides, above, and below where they're looking. Men's peripheral vision, on the other hand, is much narrower in scope. Men can spot things far in front of them—which was probably great for hunting in ancient times, but not so great when you're trying to sneak a peak at something hovering along the outskirts. In one experiment, research team Alan and Barbara Pease took men and women to a nudist camp and filmed their eye movements. Men were clearly staring agog at women's boobs, butts, and privates, even though they swore they were trying to hide it. Women, however, claimed they were constantly sneaking peaks at men's packages, but never once looked like they were.

I guess the moral of the story for women is this: If a man's talking to your boobs, give him a break, since you're probably checking out the goods on him, too.

DEAR COMMENTERS: Thanks for all your advice this week! And XenZen, Ray, Edwinna, Wondergirl, Maddy, Agustina, Angela, Alexandra: thanks for giving me a little talking-to yesterday. Yes, sometimes I need a kick in my well-toned butt. (Ha!)

And I think it's worth repeating the advice Wondergirl gave me: "You must believe with every fiber of your being that you are going to find the right person for you." Amen to that, sister.

Oh, and Alexandra: one thing: I really don't think this guy is quite the person for me. (He also didn't ask ME on a second date.) So, I think it's okay to let things more or less slide at this point (though we'll remain friendly).

Also, Edwinna, I DID look into the Meet Up thing. There's some bluegrass thing that looks pretty cool ... I'll have to get on that.