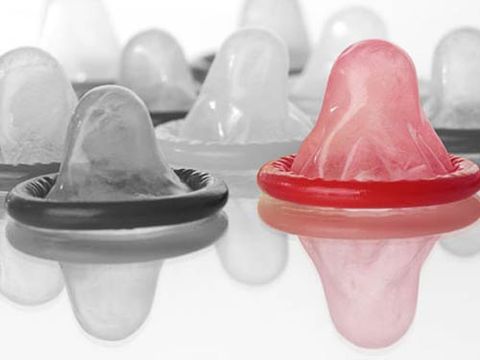 THE CLAIM: Made of polyisoprene, the "first new condom material in a decade," it promises more stretch and suppleness than latex.

FROM OUR TESTER: "These were supersoft and thin and as close as we've come to a next-to-nothing sensation in years of searching. And just the right amount of friction. Hallelujah!"

TRY IT IF: You're tired of your boyfriend complaining that he doesn't feel anything. If he doesn't with this one, he needs to talk to his doctor; you want to ensure rounds two and three.

THE CLAIM: Fair-trade natural latex condoms, in regular and organically flavored varieties, are made using a "patented process" that creates a strong yet ultrathin sleeve.

FROM OUR TESTER: "The sensitivity and sensation were average, but while the flavored variety wasn't exactly tasty, it didn't have the icky latex aftertaste common to other flavoreds. And they're certified vegan! Doing good really can feel good."

TRY IT IF: You're prepping for date no. 3 with the meat-free yoga instructor.

THE CLAIM: Lubricated inside and out with ExciteGel lubricant, a combo of menthol and "an amino acid that has been shown to increase circulation when ingested," it promises double the intensity.

FROM OUR TESTER: "Expect things to get hot—too hot! After we'd been at it for a good 10 minutes, the lube was still going strong, but the menthol crossed the line from tingling to burning for both of us."

TRY IT IF: You're looking for a change and don't mind a little fire.

THE CLAIM: Trademarked "Sheerlon latex" makes for a stronger and thinner condom, "enriched with soothing aloe" and "lubricated generously"—with four times more lube than other condoms.

FROM OUR TESTER: "The little green guy was superthin, but between the aloe and the bonus lube, things got a bit sloppy. There was a lot of cleaning up afterward."

TRY IT IF: You need the extra glide—and you have a headboard within arm's reach, to steady yourself when the slipping and sliding gets out of hand.

THE CLAIM: Made of polyurethane, supposedly stronger than latex, this second-generation girl condom (the first version bombed back in 1993) is "the only product under a woman's control that protects against pregnancy and STDs."

FROM OUR TESTER: "As a female-condom first-timer, I was surprised that it looked like an extra-large male version, only with a big ring at the bottom. I found insertion surprisingly easy but felt like my lady parts were wearing a beret as I waddled out of the bathroom with the visible(!) ring hanging down. During sex, it didn't want to stay put, and removing the whole thing afterward required a tug from my partner that sent it ricocheting."

TRY IT IF: You're a control freak; your boyfriend's lazy; you don't embarrass easily.

This content is created and maintained by a third party, and imported onto this page to help users provide their email addresses. You may be able to find more information about this and similar content at piano.io
Advertisement - Continue Reading Below
More From Love & Sex
The All-Time Best Vibrators, Reviewed by Experts
Behold: A Sex Playlist That Won't Make You Cringe
Advertisement - Continue Reading Below
The 60 Best Cheap Date Ideas
Second Date Ideas That Aren't Cliché
The Best Dating Apps for People Who Hate Them
20 Ways to Be a Better Kisser