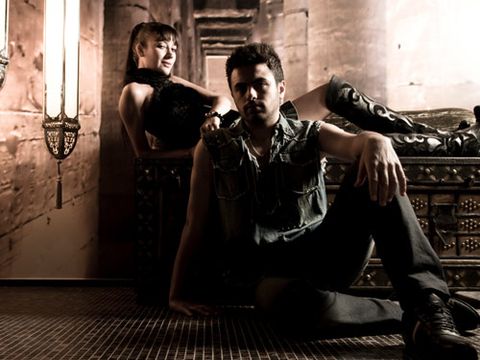 He's called the sex samurai, a consultant whose job is to cure your bedroom ills — sort of like a gym trainer, but for sex. His goal is to teach couples skills and techniques, moving them away from what he calls "the traditional grope-grope/lick-lick/fumble-fumble routine that most people do, where sometimes it's good, and most of the time it's not."

I decided to meet him in his New York City apartment after a friend of mine gushed that she'd had an erotic playdate with him. Frankly, I was expecting him to be more samurai-like: you know, tan, muscular, sword-wielding. This samurai — Eric Amaranth, 32 — is skinny and pale, in a permanent uniform of black T-shirt, tight black jeans, and uncool reading glasses. And yet his entire universe is sex. He reads about it, studies it, talks about it, has it — primarily with his partner of 10 years, Betty Dodson, the venerable sex educator, 47 years his senior. When I question the age gap, Amaranth asks, "Would you honestly not even consider Sean Connery?" Particularly a Sean Connery world-renowned for his sex skills? Point taken.

When Dodson, a compact, boisterous woman, whirls into the room, she instantly wins me over. She sits on the carpet with Amaranth, and they look good together. Both are curious small-towners, and he balances her sexed-up-grandma presence. "We don't ascribe to the soul-mate myth," says Amaranth. "We look at it as compatibility. I'm amazingly compatible with this person."

They met when Amaranth was finishing college in Virginia, back when he was known as Eric Wilkinson. He'd e-mailed Dodson, asking if she could clarify sex techniques from her book. The two met for lunch. "He walked through the door, and I went, Mmmmm," Dodson says. "But he was 22. So I had conflict. I suggested we scrap the teacher-student routine." They had amazing sex an hour later.

Eventually, Amaranth became a sex consultant — someone who meets with individuals and couples during private sessions to teach sexual skills through a combination of talk therapy, technical demonstrations, and trial runs. (A consultant doesn't participate — only guides). Today, Amaranth also manages Dodson's business, which includes educational DVDs, workshops, Websites, sex toys, and private sessions. And he has "playdates" — sexual encounters with Dodson's blessing — with a stable of semifamous play partners. "Every time I get to New York, I set up a playdate with Eric," says Nina Hartley, 49, a well-known adult performer. "He's trained by Betty herself! Eric's not gonna sweep you up and say, 'Baby, baby.' There's no pretense of romance. Friendship, yes. Respect, yes. We make a date, he comes over looking great, and two-and-a-half hours later, we've had incredibly powerful orgasms, eaten some chocolate, and he's gone home."

Yes, the Samurai has a way of opening a girl up. Amaranth is that rare heterosexual male that you can talk to just like a woman — he flips back and forth between the male and female perspectives, explaining both.

The next time we meet, I begin with an array of "hypothetical" questions, starting with how one might go about becoming multiorgasmic. Turns out, no one is. "It's really serial orgasm — a series of orgasms over five to 20 minutes. Multiorgasmic is when a woman has multiple orgasms in, say, 20 seconds. I've never been with someone who did that." To be serially orgasmic takes work, says Amaranth. The key is, after orgasm, once the clitoris is hypersensitive, apply the lightest possible pressure with fingers or a vibrator. "You might cover yourself with one hand or a washcloth," he says. "Just keep going for as long as it takes. It's amazing how tiny the movements can be. If I demonstrated, you wouldn't be able to feel it."

I drop any pretense of these being hypothetical questions. When you're sitting in front of someone who can address every issue you've ever had in a bedroom, you begin spewing the details of your past: the guy who wasn't well-endowed, the boyfriend with a weird sex face, the one on antidepressants who couldn't climax. For every weird, dysfunctional, and technically disastrous encounter I unload, he has a solution. Including how one might go about having anal sex that doesn't hurt intensely: "When doing insertion, instead of trying to gradually increase pressure when the penis won't go in, just have the guy use medium pressure and hold still. The muscles need time to conform to a new shape. You wait as long as it takes. Just wait until you can't feel him anymore. I've done it as long as 10 to 15 minutes."

At that moment, all I want is to submit to the Sexual Samurai. I want to do all the things we've just talked about, with someone who really knows what he's doing and pays such ridiculously clinical attention that I would be guaranteed a good time. We'd have incredibly powerful orgasms, eat some chocolate, and then I'd go home.

Instead, I blush and smile and remember that despite my best efforts, I'm incapable of separating sex from emotion. When I get up to go, Amaranth gives me a hug and hands me an origami rose he'd made.

Back in the real world, it all makes sense: Sex is how the Samurai communicates, how he expresses himself, and it's his obvious next step with a woman with whom he's been happily chatting. Sex is what the Sexual Samurai does.

Arianne Cohen is the author of the upcoming Tall Book: A Celebration of Life from on High (Bloomsbury). She has written for New York magazine, the New York Times, and others.