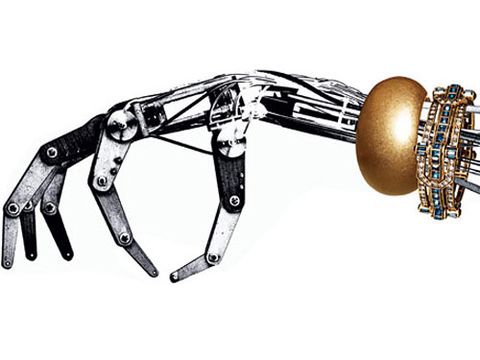 I'm at a sake bar watching a man get drunk on an ice-cold woman. He shamelessly admits he can't stop thinking about her. "Really," she says, devouring a fat slice of tuna in one tidy bite. "That's interesting." Her raw beauty recalls a young Debbie Harry. He soldiers on: Why in God's name is she single? What brought her to New York City? She smiles coyly. "You know all you need to know...for now."

Another eavesdropper might have made the assumption that this tight-lipped minx reads dumb-and-dumber books on seducing men. But I prefer to see her as proof of a new kind of woman, one who isn't fighting the urge to prattle on about her feelings. And though I don't know this carnivorous vixen, a part of me wants to shove my fist in the air and cry, "Atta girl!"

I came of age in the gut-spilling '90s, a time of Ally McBeal, "female bonding," Lilith Fair, and the explosion of the self-help section at Barnes & Noble. A decade has passed, but women still seem bent on suffocating themselves with an endless supply of self-indulgent hot air. We're due for a backlash, and I think it has arrived in the form of what I like to call the fembot: the cool, together, emotionally unavailable girl one cube over.

Take a look around, and you'll notice that more women are having their sensitivity chips removed. On Grey's Anatomy, an overachiever played by Sandra Oh cringes when friends ask for a hug, while Courteney Cox's equally ambitious character on Dirt shoos away men in favor of her vibrator. This fall, NBC is remaking the classic '70s show The Bionic Woman — she of the rational mind and superwoman body, an early-model fembot. Even offscreen, our sex symbols are playing against touchy-feely type. Angelina Jolie admits she sees no real benefit to crying. Scarlett Johansson believes that monogamy may not be natural. And Brooke Shields reveals she needs regular time-outs from her kids: "Some people revel in [full-time motherhood]. I revel in a different way."

In 2007, fembotism is the next frontier in the great big gender divide. We can narrow the pay gap, outpace men in earning degrees, helm a company, run the House of Representatives, choose to raise a child on our own, and match a man's sexual appetite thrust for thrust. But there's an unspoken disclaimer: We'd better not forsake our nurturing instinct while doing all of the above. Yeah, well, some of us are saying screw you to the fine print.

Nicole, 33, has been with the same guy for five years and has no plans to marry him — though he would love nothing more. "I like the way things are now, but who's to say that I'll feel that way in a year or two? Relationships are cyclical." She says this crisply and rationally, as though she were talking about selling her stakes before a bullish economy lapsed into a bear market.

I know where she's coming from. For as long as I can remember, the most seemingly unnatural things — craving space, delaying commitment — have come quite naturally to me. I've always understood the power of reticence, while my mother, so warm and demonstrative, didn't. I remember once, when she was pissed that my father was out too late with his softball buddies (as he was wont to be), she asked me to read a note she had written him. I was 12 — and precocious. "I don't know," I said, pouting my Wet n Wild lips. "Do you have to tell Dad everything you feel?"

Unlike our mothers, women of my generation make up nearly half the workforce. We spend seven-plus hours a day at the office, that classically male arena where men have honed a lot of their own robotic abilities. And we're learning their tricks: You don't have to — can't, really — think about last night's spat with the boyfriend; just focus on work instead. Disengage, hold your shit together, keep your cards close to your chest, and you'll get ahead. Fembots have mastered these lessons and can apply them just as easily outside the office.

At the same time, men have spent the past quarter-century on the hunt for their sensitive sides. So the guy who once joked about firing a magic mute button on a woman might look up to find that his girlfriend's now holding the remote. "Lose the skirt," a friend says to her husband when he wants to cuddle. "Quit with the eggbeater," another tells her boyfriend when, over dinner, he tries to rehash all that they have to do the coming weekend.

Lori, 32, just ended a dalliance with a warm and open guy. "I told him there was no connection, and he said, 'When I tried to make one, you blocked me. You never gave us a chance.'"

A few months before the non-relationship began, Lori had separated from her husband, a lead weight of a guy whom she had worked relentlessly to please. She decided it was time to focus on pleasing herself. "When you go through a separation, you learn that you have to take care of yourself. There's a hardening, for better or for worse. Actually, it's just for the better, I think." That myopic view influenced her dating life. "I knew I wasn't letting him in, and it was a shame because he was wonderful. But he knew the score. He could have walked at any time."

The fembot's effects are hardly limited to how she relates to men. As our lives become increasingly transitory (by age 30, most of us have had seven jobs), friends and colleagues grow more disposable. When women do get together, secrets aren't easily revealed, tears aren't immediately shed, and menstrual cycles aren't necessarily synchronized. "Sometimes I want to get to know a girl at my office who seems cool," says Ana, 30. "But I think, Why bother? It's work to become someone's friend, and I don't know if I'm going to be here in six months."

In essence, we've mortgaged off our time and energy. "I've got worries," says Kathleen, 29. "It starts with a mentally challenged brother and ailing parents. I'm navigating the backstabbing nightmare of the modern workplace, where everyone, including me, is determined to hold onto their jobs with white-knuckle ferocity. I only have so much emotion to go around, and I certainly don't have time to chat with the girls about how bloated I feel."

When time isn't an issue, it may come down to control. In a binge-prone world, fembots are emotional anorexics. Maintaining a safe distance from your feelings can be liberating (and anytime we co-opt a traditionally male attribute, we give ourselves a little pat on the back), but anyone who made it through Psych 101 knows that too much compartmentalizing will have its consequences. Feelings ignored can come back to haunt you. Worse still is another side effect of fembotism: numbness.

Over the years, I've built up defense mechanisms that have hardened like plaque. In love, I believe you either hide or seek — and I damn well didn't want to do the latter. Running after someone was too exhausting, and no one was ever worth catching. So I spent the better part of my 20s in clipped, casual relationships — until I met my husband two years ago. He was a 21st-century emo-boy who looked like Jesus Christ. On one of our first dates, he figured out what was making my sound system so temperamental. We sat Indian-style on the floor, the guts of the amplifier splayed across my living room. "I love complicated things," he confessed. Good thing for that, I thought.

While some women have knotty friendships that go back to grade school, most of my social lineage dates back no more than three years. A few weeks ago, I found a folder of cards from forgotten acquaintances. "I know we're going to be friends when we're old and gray," wrote a girl from my first job. "I don't think I could have gotten through this period without your ear, T."

Dread and a faint longing washed over me. My perfectionist side believes I've failed at being the kind of woman my mom manages to be so naturally. The cards show my capacity to love, my ability to be there — but I feel like a big poseur. I've tossed my friends aside but can't part with the cards, as if I need proof that I'm actually a caring woman who's capable of deep intimacy and selflessness.

Though I couldn't bring myself to throw them out, I wanted to get them off my hands. It was a matter of necessity, I told myself. I'm busy. I'm married. Having to be there for people, and keep it up day after day, makes me want to take a nice, long nap. I'm not the Bionic Woman. I'm human.

My husband caught me as I put the cards far, far away — at the back of a cluttered walk-in closet. He asked if I ever missed those old friends.

Me: "There was nothing left to say. I outgrew them."

Me: "I never said that to them. I just stopped calling. What you don't know can't hurt you."

Him: "There are things I don't know about you, baby."

Me: "Does that bother you?"

Him: "No. That's why I love you. You always keep me guessing."

Do I ever. Last weekend, we had dinner with my static-cling in-laws, who make me feel like I'm going to break out in hives. Four long hours later, we returned home, and he wanted to laze on the couch with me. I indulged him for a moment, but his forearms began to feel like dumbbells on my shoulders. I desperately craved a time-out from all the togetherness.

Like a puppy, he followed me into my office. I told him I needed to be alone, to work, to hear my own thoughts. He smiled, gave a wink, and shut the door behind him. It was a small gesture that showed there's one thing he does know: giving me space gets me wetter than Seattle. What can I say? Fembots have feelings, too.