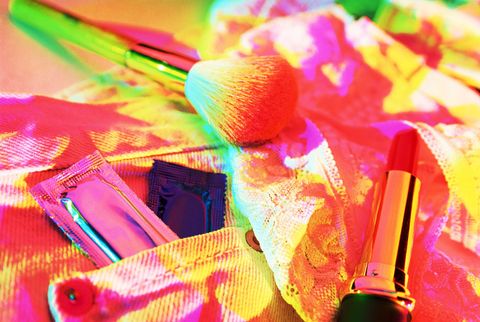 "I'm not sure if I even have any condoms," Harry said, riffling through a box underneath his bed. "What?" I said, sitting up in a tangle of sheets. "How is that possible?" Harry had picked me up at a mutual friend's book party a week earlier. I never go for men in suits, but the more he tried to impress me, the more I laughed, which added to our chemistry. Still, I didn't expect our first date to end in his bedroom, so I'd left my travel sex kit at home. I certainly hadn't expected to argue about safe sex with a near stranger, one I assumed brought ladies home on a regular basis. How could he be so unprepared?

"You realize there's no way we're doing this without one, right?" I said. "Even if I were on the Pill—which I'm not—we'd still have to use a condom."

"People like us don't get STDs," he said offhandedly. "You know: White. Heterosexual. Middle-class. It's all blown out of proportion."

This factually incorrect declaration was way beyond our oppositional banter. Sure, as a straight woman, I'm at a lower risk for, say, HIV. But women and men both are often asymptomatic for certain sexually transmitted infections, like gonorrhea and chlamydia. Left untreated, some STIs in women can lead to infertility and cancer. The reasons for protecting myself are legion. Besides, who needs to defend that choice, anyway?

There's a cultural assumption that all men hate condoms. But in both serious and casual relationships, my partners were equally concerned about protection. We'd all grown up in the HIV/AIDS era of the '80s and '90s: I know straight women who contracted the virus or battled other, less deadly STIs or had abortions. It wasn't until I hit my 30s that men started to complain. Suddenly, they were going soft—and if we didn't use a condom, it would all be OK! Their erectile dysfunction was somehow the prophylactic's fault, a convenient cover for their insecurity. Before Harry, I assumed that all my friends had casual or semi-casual sex safely. But when I asked, my female friends hedged—some did, some didn't—and guys told me that their dates were increasingly saying, "We don't need condoms. We don't have any STDs—right?—and sex is better without them."

As it turns out, I'm scarily in the safe-sex minority. Only 19 percent of single women 20 to 44 regularly use condoms, according to a 2008 study by the Guttmacher Institute, which studies sexual health—and that shockingly low number is comprised of women who aren't living with a partner. The study's co-author, Laura Lindberg, Ph.D., and other experts list the same reasons for the decline in use: Women switch to other methods as they age; both genders feel that condoms are "for teens"; by their late 20s, both partners have likely been in long-term relationships in which condoms were long ago tossed out. So what are the other 81 percent of women using as STD protection? Lindberg surmises that those women figure their partners "don't look risky."

That's what Britt Lee, 28, says over coffee in midtown Manhattan. An account manager at an ad firm, Lee has occasional casual sex with a coworker. She's on the Pill; he puts on a condom about halfway through. She hasn't been tested recently, so she's not certain about her status or his. "He says he doesn't have anything," Lee explains, "and he'd be honest with me because we're friends."

Many women think this way, say experts—but it's dangerous. "We never get to an age when we can just trust we're not being exposed to an STD," says Dr. Vanessa Cullins, Planned Parenthood Federation of America's VP of external medical affairs. "The more sexual partners you have, the more likely you are to be exposed. Until you are in a committed, monogamous relationship, that person is probably having sex with others."

Sara Heller, 38, who works for a political action group, is also in a friends-with-benefits situation. After a medical scare, Heller discovered that her chance of getting pregnant is "slim to none," and since she's seen her partner's test results and condoms give her yeast infections, they've eschewed them completely. "We're OK with the idea of raising a child if that happens," she says. "But the chances are so minimal that we don't worry about it." The National Campaign to Prevent Teen and Unplanned Pregnancy Senior Media Advisor Marisa Nightingale says she talks to women like Heller all the time: "The older women get, there's this unspoken feeling of, 'I don't want a pregnancy right now, but if it were to happen, it wouldn't be the worst thing in the world.'"

The major reason men hate condoms, of course, is that they think sex is hotter without them. And women tell experts the same thing. (Why else would the Bill and Melinda Gates Foundation be offering a $100,000 grant for a condom people actually want to use?) But a January study published in the Journal of Sexual Medicine found that both men and women rated sex "highly pleasurable" with or without a condom. And I've always wondered if women mean that it's physically more pleasurable or that it feels emotionally better not to use condoms. "When you aren't sure where the relationship is going, people say ditching condoms feels like, 'OK, we trust each other,'" says Nightingale. "But there are other ways to do that than putting yourself at risk."

I get it. Even with my hard-core stance, I've had unprotected sex a few times within a casual relationship. The last was just a few months ago. I'd just gotten tested the day before (even though I know that it takes months for anything to show up) and thought the guy and I were heading toward something real. Unprotected sex never feels hotter to me, and there were no condom-less fireworks that time, either. The next time I saw him, I hastily made up a reason why I was reaching for my nightstand; my relief at having safe sex with an uncertain partner made it all much more freeing.

"I like that," she says. "Maybe I'll start using condoms more."