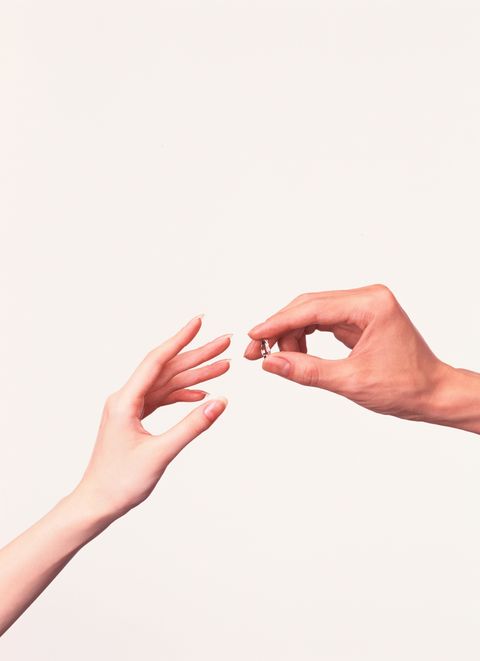 Forget men—one of the longest and most meaningful relationships I've ever had was with my doctorate dissertation. It consumed me, and fascinated me, and took up all my time and energy. It accounted for four full, pivotal years of my life.

As I worked on it, friends all around me were getting engaged, tying the knot, and changing their names from Ms. Them to Mrs. Someone Else. When the full draft of my thesis was finished and the end was in sight, I decided that I wanted to mark the pivotal moment when I changed my name from Ms. to Dr.

So I bought myself a diamond ring at an auction, and when my I passed my thesis defense, I put it, proudly, on my left ring finger.

My statement can result in weird interactions. "So what does your fiancé do?" strangers will ask, and I'll stare blankly at them for a second before collecting myself. "I'm not engaged," I'll reply. "I'm a doctor." Then it's their turn to stare, understandably confused by the non sequitur. But then I get to explain why I bought the ring, and why I wear it where I do.

Engagement rings serve many purposes. They're a demarcation line, a visible marker of a shift in a relationship. In straight couples, they're often a way for a man to demonstrate his financial viability and his socioeconomic status—and, by implication, the future status of his future wife.

At their core, though, engagement rings serve the same purpose as marriage does: They're about recognition. Recognition in the eyes of your community, and of everyone you meet, of the choice and the commitment that you've made.

This is one reason why women change their names when they get married (about86% of American women, at last count). These days, taking your husband's last name is a way of asking the world to recognize the shift that has taken place in your life.

For me, the first and only time I'll change my name served a similar purpose. I was marking the end of one chapter of my life and the beginning of the next: my transition from student to scholar. I saw no reason beside societal custom (which is arbitrary and infinitely malleable) that my left ring finger should be reserved for only *one* form of recognition.

There are a lot of people who would prefer for women like me to marry off and shut up.

I wrote my dissertation about romantic comedies (that's right, I have a PhD in chick flicks), and I spent a good deal of time thinking and writing about the ways the genre depicts gender, sex, and power. So I know a few things about how women who wield professional power are treated in the stories we tell ourselves as a culture. More often than not, these women are tamed. And in rom coms, the taming translates to a woman getting married by movie's end.

In many ways, I'm a lot like those rom com heroines. I'm a feminist and a professional woman; in the eyes of society, I'm a prime candidate for that kind of taming. There are a lot of people who would prefer for women like me to marry off and shut up.

Which, obviously, I have other ideas about.

This is a rebellion against the inescapable pressure I feel to find a man to put a ring on me. It's a mild little mutiny, but it feels like an important one.

Sure, as feminist acts go, I know my ring is one of extreme privilege. It's an expensive act, for starters, and some people would argue that the consumption of pricey sparkly things produced and marketed by a deeply problematic industry isn't really a feminist act in the first place. On some days, I agree with them. The fact that I'm in a position to mark the end of my more than two decades of education with a high-end decorative object—the fact that I spent more than two decades in school at all—places me among a tiny percentile of people, let alone women.

Some days, the work of making that change feels ineffective and exhausting, and I ask myself if I really believe it's possible. Then I look down at my left hand, and I remember: I do.