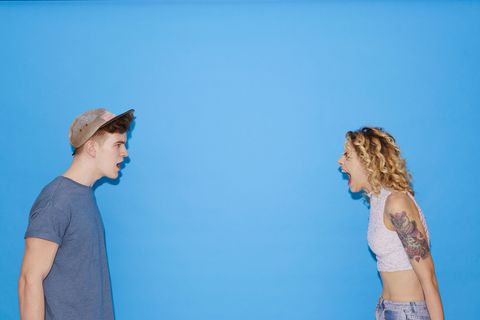 My boyfriend and I are not good at fighting. We're better than we were when we started dating two breakups and three years ago, but it's never come naturally to either of us. I have often wished we fought like I imagine Pink and Carey Hart fight. I would love to scream and slam doors, maybe throw a vase or two. Then I would peel off on my motorcycle and write a song. I don't do these things for two reasons: this behavior is erratic, abusive, and fraught with confrontation. Also, I only own one vase.

I have always been scared of confrontation. My therapist says it stems from my fear of abandonment. (That last sentence is easier to write than just writing "I have a fear of abandonment.") My logic used to be: If I get angry at my boyfriend, he could say, "well if that thing I do that I don't want to stop doing makes you mad, I don't need to be with you. Bye!" And then he'd leave me. Forever.

Slowly, I've gained enough confidence in myself and our relationship that I'm able to tell him in the moment (or a couple moments after the moment) when I need an apology because he made me angry or he joked that I look like Brett Butler (I do). Before, I would say nothing, convincing myself that it didn't bother me, then I'd go on a podcast and vent everything. Or, in a particularly gross reaction, I'd overcompensate in the opposite direction and be even more doting on him. The more I loved him the less I could be mad at him; it made perfect sense!

"It's like living with a ghost who doesn't want to fuck you. It's like you can feel him trying not to touch you."

It didn't help our relationship that he is equally as poor at addressing his anger towards me. He doesn't have a therapist to tell him this, so I will do it for him—here. I hope he's okay with that. If he isn't, I'm sure he'll tell me as soon as he reads this. But in the past, while I would rant about him on a podcast or send him a sentimental text that completely contradicted how I felt, he employed a different tactic to manage his unwieldy emotions towards me: The Silent Treatment.

The Silent Treatment was his weapon of choice. It doesn't sound so bad, actually. With the word "treatment" in name, it has therapeutic ring to it­ like it's a part of a spa package.

"Would you like to add the silent treatment to your massage today?"

"Well, for an extra $60, at the end of your massage, your therapist, Julio, will climb onto your table and lay with his back to you while scrolling through his phone, sighing intermittently, loud enough so that you'll know he's awake and choosing not to talk to you. That'll last for 20 minutes or until you cry yourself to sleep."

I always knew The Silent Treatment as something housewives did in 1980s stand­up comedy acts, but it turns out men do it, too, and pretty damn well.

If you've been on the receiving end of The Silent Treatment, you know how awful it is. In fact, it's a textbook form of emotional abuse. And boy does it feel like it. The thing is: it's not always silent. That's how they get you. Hours would go by with only one-word answers out of him. Finally I'd break.

"You haven't said anything to me all day."

"I'm talking to you right now. What do you think this is?"

It's like living with a ghost who doesn't want to fuck you. (I don't know about you guys, but I've found most ghosts to be DTF). It's like you can feel him trying not to touch you.

"I wish there were Ignored Women's Centers. Places where I could have gone when he would shut down on me."

I wish there were Ignored Women's Centers. Places where I could have gone when he would shut down on me. I could flee in my Prius while he would watch The Walking Dead and pretend not to notice. I'd walk into the Center where kind women would greet me with open arms and just listen. They'd give me The Listening Treatment. And I'd make excuses for him.

"I think he has laryngitis!" I'd shriek. "What if he's a mime and hasn't told me yet?" I'd question my safety there. "What if he finds me?"

"He's not looking for you," they'd assure me. "He doesn't want to talk to you right now."

Luckily, I don't need that make-believe shelter anymore. My boyfriend and I have finally learned how to embrace confrontation as something that will only help us as a couple. And for those times when it's still too scary to address what's wrong, we don't revert back to our abusive tendencies. We eat. We eat enough so that by the time we make up, we're too full to have make-up sex. Instead, we lie in bed with our backs to each other scrolling through our phones and sighing loudly together, as it should be.

Nikki Glaser is the host of Not Safe with Nikki Glaser on Comedy Central on Tuesdays 10:30/9:30c.