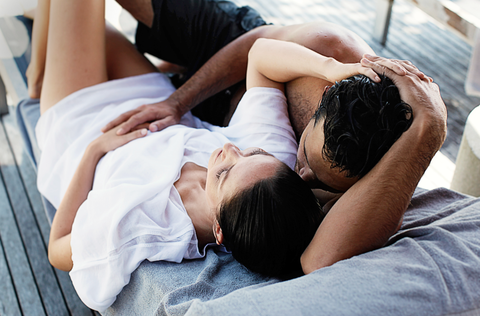 After I had sex for the first time at age 36, I quickly realized that finding willing partners wouldn't be an issue, so much as the wide chasm in confidence, knowledge, and skill that divided me from them. On a secluded hike with the boyfriend I lost my virginity to, I suggested sex in a meadow. He gave me a "been there, done that" eye roll. When I suggested a rendezvous at a deserted roadside vista during a long car ride with the next man I dated, he said "This is a stick shift," alluding to the insurmountable logistics. I capitulated—we are both very tall.

I figured these were inevitable consequences of my late start. Most men my age were already finished with the figuring it out and messing it up that felt—to me—like half the fun. So I braced myself for what else felt inevitable: bad sex, awkward sex, and comic mishaps, like when I accidentally kicked a man in the face as he attempted a deft roll into a 69. With another man, I suddenly lost interest in the midst of receiving cunnilingus. I lay there, wondering, Do I keep pretending, or just grab my pants and go? One afternoon while making out behind a dumpster with the captain of a dolphin-watching boat, I learned the hard way that a few unfortunate seconds is all that divides heavy petting from a hand job. Afterward, I stood stunned, blinking against the harsh sunlight, palm suspended in midair, wondering how that just happened.

"I braced myself for what else felt inevitable: bad sex, awkward sex, and comic mishaps, like when I accidentally kicked a man in the face as he attempted a deft roll into a 69."

Still, there were certain benefits to having one's adolescent experiences as a grown-up. I didn't have to wait for anyone's mom to pick me up. I didn't have to see those guys in homeroom the next day. Didn't have to wonder if they'd call, or what it might say about me if they did, or didn't. I may have been sexually innocent, but I was still an adult. I had nixed my chance to be the ingenue. My prolonged innocence meant I'd never be the siren, chanteuse, or temptress. Nor would I be the witch, whore, mother, or MILF. Instead, I had found my niche between bombshell and librarian, and planned to stay there indefinitely.

Then, six years after losing my virginity, I decided to sail around the world aboard a square-rigged tall ship. I had paid to work as a member of the crew, to learn to sail, and to cross oceans the way people did in the "age of sail"—a phrase I found devastatingly romantic. Many of the crew were young Scandinavian sailors, with whom I lived in very tight quarters. It wasn't long before the most improbable pairings became probable. Predictable. Inevitable.

The first time I went to bed with one of the sailors, a blue-eyed man 12 years my junior, I figured he wanted me in spite of my age. I wasn't noticeably older; my complexion reflected three and a half decades of clean living. So I was absolutely unprepared for what happened after our tryst at a hotel where we stayed one night while docked at a port of call. "You know what's the sexiest thing about you?" he asked, as we lay spent and tangled in a mess of once-crisp sheets. I was in too languid a state to even open my eyes, but I imagined my skin damp and tanned, my sun-bleached hair splayed across the pillow. "Your chest wrinkles," he said.

Chest wrinkles?! How, amid all the ads regarding wrinkles, veins, dark spots, fine lines, lasers, and Botox, had I not been primed to fear and track their onset?

The sailor didn't apologize. My body bore witness to my life's experience, he said. "It's wonderful," he murmured, tracing them first with his fingers, then his mouth. Had I become The Older Woman, despite my lack of experience?

I'd promised myself years prior, when I was still a virgin, to never talk a man out of adoring my body. I wouldn't walk backward out of a room, hiding my imperfect backside from someone who, 20 minutes earlier, had been ready to construct a shrine in its honor. So I lay still and forced myself to receive his compliment.

"You know what's the sexiest thing about you? Your chest wrinkles."

My delayed sexual awakening had, in effect, caused me to fast-forward from virgin to "older woman" in a handful of years, when for most women that progression takes 20, or 30. I'd never considered it would happen, much less that it might lead to other possibilities. Weeks later, over a game of backgammon belowdecks, I confessed to the blue-eyed sailor the attraction I felt for another of our shipmates who was 20 years younger—barely an adult. "I don't have many regrets about waiting for sex," I said. "But a part of me wishes I hadn't missed out on that." I explained how strange it felt: to be nostalgic for an experience I'd never had. Would never have. I'd never have my hands and mouth on a body just bloomed, humming and taut, empirically, undeniably beautiful. I wanted that energy inside me—the kind that defines, and is wasted on, youth.

"So ask," said the blue-eyed sailor, rolling the dice.

Just ask, I repeated to myself. He might have said, "Just jump overboard." But then again, what did I have to lose?

Our coupling—late one night, in the heat of the engine room—felt urgent and reckless, heightened by the ship's rolling, the clanking of wrenches beside our heads, the stagnant, diesel-smelling air, and the very real possibility of being caught. It was, in a word, perfect. I'll savor those gorgeous 30 minutes forever. That night wasn't about some clutch at my fading youth; it was about every wondrous, surprising "Yes" I'd denied myself for fear of others' judgment. It was about rethinking which of life's possibilities I could be allowed.

"My delayed sexual awakening had, in effect, caused me to fast-forward from virgin to "older woman" in a handful of years."

That same impulse followed me to an island near Africa, where I celebrated Thanksgiving by skinny-dipping with my blue-eyed Scandinavian sailor, a 20-something yoga instructor, and a barely-graduated aspiring surfer. We all raced into the surf and played like we were kids: splash fighting, running in slow motion, floating as if sacrificing our bodies to the sky. We watched reverently as the sun—a blazing, brilliant red—sunk into the horizon.

I was last out of the water, dreading the long walk back to where I'd shed my sarong. Alone, I felt naked. Too exposed. Vulnerable. But I made myself walk tall, letting my body look however it looked, move however it moves, carrying me from the sea and over a long slope of shifting sand.

With my sarong wrapped around me, I turned toward the last rays of sun, squeezing salt water from my hair. The sailor stood close. Leaned his shoulder into me, grinning.