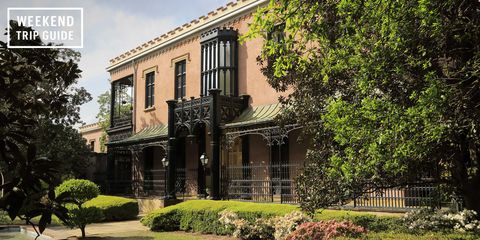 Welcome to Marie Claire's new series on weekend travel, designed to help you make the most of your glorious two days off.

When I landed in Savannah, Georgia, I had two things on my mind: ghosts and food. Savannah is considered one of America's most haunted cities, and I'm the type of person whose favorite show growing up was Unsolved Mysteries and favorite movie was Wes Craven's People Under the Stairs, so clearly, I'm down for the scary stuff. (Parents, what was happening?) I'm also, of course, down for all things food and booze-related—that's typically how I prioritize travel, in general. So as I made my way through Savannah, eating all the things and drinking all the things and seeing many things (no ghosts, unfortunately), I wrote it all down here, for you, so you can skip the research. (Now book the flight.)

I stayed at the Andaz hotel, set perfectly close to the River Walk, the historic district, Central Market, and basically anywhere you need to go. (Savannah's pretty small, so it's not hard to make sure you're in a good spot.) It has free snacks, (non-alcoholic) drinks, and a pool. It has a bar with cute bartenders who earnestly wave when you walk back in after a night out. If you're lucky, it has pretty people waiting around to head to a wedding so you feel like you're in some sort of bridal magazine but definitely in the background because they're wearing pretty dresses and you're wearing denim and a tank top. It also has some of the best drinks in the city (more on that later). If you want to skip the hotel scene, I was told on good authority that Airbnb has good options, pending a) when you go and b) if you're willing to drive while you're here.

For a relatively small town, there's a ton to do. There are ghost tours aplenty, including ones that drive you around in a remodeled hearse. I found the Visit Savannah visitor's guide super helpful—that's where I got intel on what ghost tour fit my schedule/needs (Ghosts & Gravestones, FWIW—you get to ride a trolley and get an exclusive tour through Andrew Low's house, which has creepy stories but also creepier dolls), the best time to go for a Riverboat Cruise (go for the sightseeing one—bring cash for drinks and wear sunscreen), and times/info for the Telfair Museums, one being the site of the royal Governor's residence once upon a time and the oldest "art" museum in the South.

It has free snacks and (non-alcoholic) drinks and a pool. It has a bar with cute bartenders who earnestly wave when you walk back in after a night out.

There are also must-sees like Forsyth Park, The Cathedral of St. John the Baptist, and—if you can—Bonaventure Cemetery, the famous cemetery from Midnight in the Garden of Good and Evil. (This is the furthest point out from the "heart" of Savannah, so get ready to drive, get a taxi, or take an Uber—or just build in some walking time, you ambitious person, you.)

If you're going for the weekend, make sure to build in some time on that Friday or Monday (if doing the 3-day thing) to visit Mrs. Wilkes' Dining Room, a restaurant that only serves Monday-Friday from 11 am - 2 pm. (I sadly did not go, so cue the 😭.)

For day drinking, head to Moon River, a brewery that serves great beers, including local IPAs and features a rotating list as well as some tried-and-true favorites. Or, you know, just grab a to-go cup of your favorite drink anywhere—Savannah doesn't have open container laws.

Huey's on River Street and has New Orleans flair—go for brunch, and get the the bloody mary and beignets.

The Collins Quarter is also very delicious, although it took my table a straight-up hour to get its food...which we devoured the second it hit. (See: one hour.) Recommended, but maybe don't go starving/get a snack first. (See: beignets and bloodies at Huey's.)

For dinner, head to The Olde Pink House (be sure to make a reservation!). The top floor features beautiful chandeliers and people *request* to sit in the main ballroom. When we went they were pretty packed, and offered to seat us in the basement tavern—which features the same menu, and feels a bit more bar-like (read: younger crowd). Little did we know that they'd seat us at the two-top in the wine cellar, straight out of a proposal scene. The host, waitress, and several restaurant-goers commented that it was "their favorite seat in the house."

For dessert/a midday snack/basically anytime, head to Leopold's Ice Cream for...man...just the best ice cream. (Need I say more? Okay, I will: Get it in a sugar cone. Do not drip on yourself like I did. Repeat often.) For non-fussy drinks, head to the pub Circa 1875, which is perfect for a pre- or post-dinner cocktail or beer. If the weather is nice/not too hot, head to two great outdoor rooftop bars. One being the roof at The Bohemian Hotel (called Rocks on the Roof) which has a chill, hangout vibe, as well as the roof at the Cotton Sail Hotel (Top Deck), which is a bit more lively (I saw two bachelorettes there).

Finally, the speakeasy. Mata Hari's is a fun bar "hidden" away on the "second level down" behind the Quality Inn. When you descend the steps, go to the left, and stop when you reach a red door with a buzzer. (Depending on when you go, there will probably be some people outside—you know, so not-so-secret.) You'll need a "key" to get into the bar, which you can get from your hotel—there are other ways to get one, but I don't know them—or take your chances by just going. It's an absinthe bar, but they feature other things too. Caveat: Savannah, I found, is *not* a cocktail city, so stick to the basics or beer, especially here. (And if you really do want a good, nuanced cocktail, head to the Andaz's bar, 22 Square Bar—they were the best I had while there.) The vibe is fun, if a bit gimmicky, but I was into it. There's typically a singer and piano player layin' down the tunes, and dancing by patrons, so it's a fun night out.

You'll need a "key" to get into the bar, which you can get from your hotel.

Helpful Tips and a Fun Fact:

1. The Savannah-Hilton Head airport is very small, but the security line doesn't take a ton of time—so try not to get there *too* early unless you want to be roaming around.

2. Establishments are so helpful/willing to split checks—they even ask before they bring you the bill if you're with other people. We never ran into a card limit or anything like that. 🙏

3. Get a "key" from your concierge (it's typically just their business card signed with a name) for the speakeasy/Mata Hari and go early to beat the drunkies. You can definitely get into it without a key, most likely, but it seems like it takes longer—the key is kind of like a fast-pass at Six Flags.

4. If you're staying for longer than a weekend or have an extra day, head to Tybee Island—it's about a 20 minute drive away from Savannah, and is known for a great beach. Bonus: It's also a big location for beach movies to be filmed. The Little Mermaid live remake, as well as the Baywatch movie (yes, with Zac Efron) were both shot here.

5. Speaking of The Little Mermaid remake, the riverboat captain told us how he was on set for a scene and the male star (AKA William Moseley—yes, the dude from The Royals and The Chronicles of Narnia) got spooked because he claimed to see a man hanging from a tree while filming. When they went to check it out, there was nothing there. It's probably hearsay, but I'm just pissed Moseley saw a ghost and I didn't, TBH. Next time.

Samantha Leal Senior Web Editor I'm Sam, the senior editor at MarieClaire.com.
This content is created and maintained by a third party, and imported onto this page to help users provide their email addresses. You may be able to find more information about this and similar content at piano.io
Advertisement - Continue Reading Below
More From Travel Guides
The Insta-Worthy Places to Visit in October
Where to Stay, Eat & Explore in Sag Harbor
Advertisement - Continue Reading Below
The Instagram Guide to Coronado, California
6 Easy Escapes From NYC
A Trip to Fiji Is Totally Worth the Long Flight
Barcelona Awaits You Once Quarantine Is Over
The Instagram Guide to Jupiter, Florida
Bored at Home? Take a Virtual Vacation
Dreamy, Inspirational Photos of Tangier, Morocco
Instead of a Honeymoon, Take a "Buddymoon"