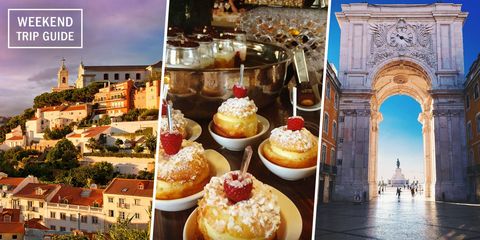 Behold Lisbon, awash in color and pulsing with passion. The central neighborhoods—no matter which you choose—are guaranteed to be charming, ornate, and several hundred years old, even with the "newer" ones built after the earthquake of 1755. Here's your easy as pie guide if you find yourself in Portugal's capital city, where the locals are friendly and unnaturally good-looking.

Palácio Belmonte—a favorite of Christian Louboutin's and other Hollywood A-listers (the staff is very discreet)—is a fifteenth-century palace with 10 suites, each featuring their own warren of secret turrets and terraces. The oldest tower dates back 138 B.C., no big deal. I stayed in the frescoed Ricardo suite overlooking the Alfama district's medieval churches and the Tagus River.Turning the antique skeleton key and stepping into the sunken library, I felt like I was in a fairytale and/or awaiting a visit from her prince. Owned by the House of Belmonte for 500 years, the royal residence opened to guests in 2000 after a six-year, multimillion dollar restoration project. Think of it as living in the palace you always wanted, without all of the pesky upkeep. At the other end of the spectrum, the My Story Hotel Ouro nails the tourist's trifecta. It's lively, centrally located in the trendy Baixa-Chiadodistrict, and can be booked for less than $50 a night.

Fado is Portugal's national anthem, a type of bluesy folk music that natives say is difficult to describe. Make a reservation at Club de Fado to enjoy Portuguese food, drink, and an authentic fado performance by nationally renowned singers.

Sit at the bar and take in a game of cricket on the dome of flat screens at the ultra-modern bar at Pestana C7, a brand new hotel opened in the center of the city by famed footballer (soccer player) Cristiano Ronaldo.

New to Lisbon? Make the Lisbon Story Center your first stop. You'll get a quick interactive walking tour of the city's history, from its Greek and Phoenician roots through present day.

Café Lisbon has an outdoor patio on a quiet square off the busier Rua do Alechrim in the riverfront Baixa-Chiado neighborhood by the banks of the Rio Tejo. Sip a sparkling water with lemon and people watch as you wait for your Pastel Lisboa, a flaky beef pastry that's a Portuguese staple, and Rapini rice.

If you're seeking more of an upscale vibe, head to the wood-paneled dining room of Four Seasons Hotel Ritz Lisbon for weekend brunch. Here you'll find delicacies such as salada de polvo, parfait de fois gras, and oysters imported on the daily from France. Be sure to leave room for the exquisite desert bar.

1. Walking is the best way to see Lisbon, which spans seven sprawling hills, but when the cobblestones become tiresome, try the vintage yellow tram that cuts through the central district. Buy a ticket for Tram 28's hop-on-hop-off service, and soak up the city for less than the price of a bus tour. You can also take one of Lisbon's four funicular railways up and down the hills or call an Uber.

2. Portugal is home of that delicious dessert wine known as Port. Hailing from the Douro Valley to the north, Port is strong, sweet and on the menu at many restaurants and wine bars throughout the city.

3. Take a day trip to idyllic Cascais on the Portuguese Riviera. It's the country's summertime hotspot, but you can hit the beach any time of year. I explored the coast and its sublime Atlantic Ocean overlooks while test-driving a new BMW 5-Series, but you can take the train, too—a single ticket from Lisbon costs about $2.

Advertisement - Continue Reading Below
More From Travel Guides
The Instagram Guide to Dublin
The Instagram Guide to Tokyo
Advertisement - Continue Reading Below
Travel the World Without Begging for More PTO
How to Elevate Your Airport Style
Everything Worth Doing During a Weekend in Denver
Embrace Your Inner Witch in Salem, Massachusetts
The Best Places to Explore In Dreamy Dubrovnik
Channel Fall Vibes in the Catskills
The MC Beauty Guide: Los Angeles
The Instagram Girl's Guide to Dubai