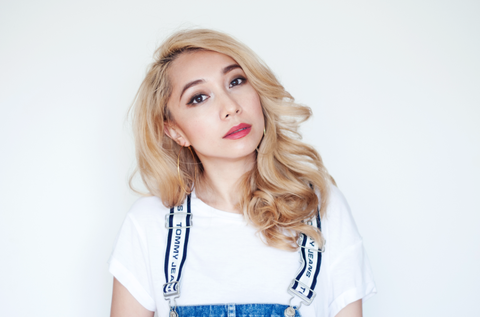 Courtesy of the author

My addiction to hair dye began in high school. I colored my hair with abandon—blue, pink, green, purple, and everything in between. Rainbow-tinged strands were my rebellion against the tyranny of a Catholic-school uniform. The process required an unhealthy amount of bleach and half a jar of neon dye, and it left behind a colorful, stringy, hay-like mess. To me, perfect.

When I entered adulthood, having hair that actually looked like hair became more important than teenage defiance, so I replaced the purples and pinks with auburns, caramels, and honey-tinged browns. Then, last year, I decided to go blonde—which ended up being the most controversial color choice of all.

Marilyn Monroe may be the ultimate blonde icon, but as an Asian woman, I was lured into the world of peroxide by Soo Joo Park, Devon Aoki, Amy Pham, and countless K-pop stars. I'd heard some people argue that minority women who dye their hair blonde are ashamed of their race and are propagating Western beauty ideals, but I thought that was silly. If Caucasians could attribute their bleached hair to personal preference, why couldn't I? My muse wasn't Barbie; it was all those aforementioned gorgeous Asian blondes—ethnicities fully intact. The medium-golden-blonde dream wasn't easy to achieve (it took two days and three rounds of bleach), but I loved the results. Friends fawned over me the way friends do, and strangers complimented me on the street. Online, where I write about beauty for various websites, it was a different story.

"My muse wasn't Barbie; it was all those aforementioned gorgeous Asian blondes—ethnicities fully intact."

I often include photos of myself with the articles, and when I posted one that showed my blonde hair (I was wearing color contacts, too), the race-shame critique came up in the comments section. One example: "Dyed your hair blonde and wearing lenses...fucking Eurocentrism, man." My extended family weren't all fans, either. Perhaps most jarring was a comment (in person) from my male 13-year-old cousin, who implied I was trying to be a "white girl." His misguided argument was disheartening. Was he being taught, somehow, that women of color who dye their hair want to be another race?

We both grew up bombarded by Western beauty standards in the media, where the majority of women idolized on magazine covers and in advertising campaigns are white. The inundation starts young; as a kid, I played with dolls that were blue-eyed and fair-haired. After a childhood of these subtle cues, could I blame him for leveling the accusation against me? For a brief moment, I second- guessed my hair-color decision: Had my upbringing affected me more than I realized? Was going blonde my attempt to assimilate?

Just as quickly, I dismissed the idea. Blondeness, artificial or not, can't be owned by one race. Valuing the beauty of all ethnicities cannot be about limiting aesthetic choices for certain groups. In fact, while my cousin and the commenters online may have had good intentions—rooted in an awareness of predominantly white beauty standards—their assumption of internalized racism is damaging and dangerous. To accuse minority women of self-hatred just because their hair is blonde is not only ludicrous, it's also an admission that the dominant culture does have the power to limit our freedom to choose.

In the end, I kept my hair blonde for about eight months. And when I eventually decided to go back to black, it had nothing to do with race—and everything to do with upkeep. As a blonde, I may have been all about ditching dark roots, but ditching my heritage? A box of dye doesn't have that much power.

This content is created and maintained by a third party, and imported onto this page to help users provide their email addresses. You may be able to find more information about this and similar content at piano.io
Advertisement - Continue Reading Below
More From Beauty
Vitamins for Your Shiniest, Healthiest Hair Ever
NATIVE Deodorant Is a Clean Beauty Miracle
Advertisement - Continue Reading Below
There's a BB Cream for Every Single Skin Type
Consider This a Sign to Get a Lob This Summer
Foot Peels Are Your Satisfying Secret to Soft Feet
Bronzers That Leave Your Skin Sun-Kissed & Glowing
The Dry Shampoos You Can Count On
Should You Be Using a "Natural" Toothpaste?
Black-Owned Beauty Brands You Need to Know
Charlotte Cho Swears By This $22 Liquid Liner