“I would never hire someone with a tattoo like that,” my (very old-school) father loved to say whenever he spotted a person with a little body art. Because to him, and many parents, tattoos apparently make you look unprofessional, uneducated, unemployable, and every other dumb stigma that’s been attached to ink for as long as they’ve been considered cool.

But the results of a new study are about to prove parents everywhere—my dad not excepted—very wrong. Not only do employers feel indifferent toward tattoos now, but having a tattoo can actually help you get a job.

Researchers from University of Miami and University of Western Australia Business School set out to study if tattoos really do have an effect on employment, like we’ve all be led to believe. Though 40 percent of millennials in the U.S. have at least one tattoo, according to the Pew Research Center, 72 percent of them say they usually cover their ink up. So the researchers studied only those with visible tattoos—about 2,200 people across the country—to see how their tats impacted their job.

According to their findings, a person’s tattoo didn’t matter at all to employers, and in some cases, it actually helped the study participant get a job. “Not only are the wages and annual earnings of tattooed employees in the United States statistically indistinguishable from the wages and annual earnings of employees without tattoos," read the study's findings, "but tattooed individuals are also just as likely, and in some instances even more likely, to gain employment.”

Yes, please immediately forward this to every stuffy pearl-clutcher you know with a middle-finger emoji. "The long-held stigmas associated with having tattoos, and particularly visible ones, may be eroding, especially among younger individuals who view body art as a natural and common form of personal expression," said lead study author Michael French in a press release.

So, if you’ve been holding off on getting that sweet, sweet tattoo in fear of societal judgement, perhaps the time has finally come for a re-evaluation. Just maybe wait to tell your parents until after the ink dries. 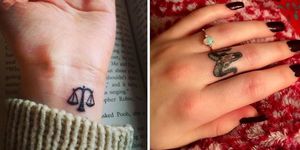 36 Astrology Tattoos That Are Out of This World
Chloe Metzger Senior Beauty Editor Chloe Metzger is the senior beauty editor at Cosmopolitan, obsessively writing about new makeup launches, the best hair products (curly girl here; whattup), and the skincare formulas that really work for every skin type (follow her on Instagram to see behind-the-scenes pics of that magazine life).
Advertisement - Continue Reading Below
More From Beauty
WORTH IT: Royal Fern Skin Perfecting Essence
Blonde vs. Brunette: Celebs Who Made the Switch
Advertisement - Continue Reading Below
My Top 3 Favorite Lipsticks Right Now
Khloé Kardashian's New "Bronde" Bob Is a Moment
The Teeth Whiteners I’ve Tried and Loved
The Must-Have Products for Air-Drying Your Hair
16 Super Pretty Valentine's Day Makeup Tutorials
Ashley Benson's Bob Just Got a Major Makeover
Editor-Approved: The Best No-Streak Self-Tanners
Pat McGrath's New Lipgloss Is Everything