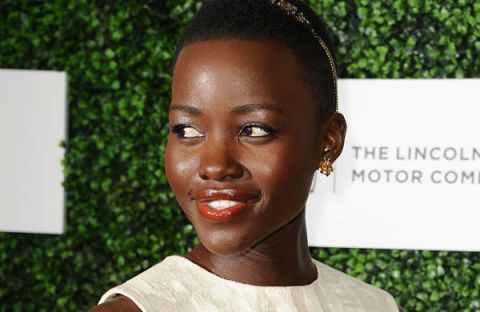 Oscar nominee Lupita Nyong'o has already wowed audiences this awards season for her impeccable style and eloquent acceptance speeches. But her remarks at Thursday's Essence Black Women in Hollywood luncheon pulled on our heart strings even more, as the stunning actress took the opportunity to discuss a topic deeply personal to her: black beauty.

After winning Best Breakthrough Performance, Nyong'o took the stage and read a letter she received from a girl. The note read, "I think you're really lucky to be this Black but yet this successful in Hollywood overnight. I was just about to buy Dencia's Whitenicious cream to lighten my skin when you appeared on the world map and saved me."

Nyong'o said that her "heart bled a little" when she read those words, because she too remembered a time when she would pray every night for lighter skin. "I remember a time when I too felt unbeautiful. I put on the TV and only saw pale skin, I got teased and taunted about my night-shaded skin," she said.

The actress then revealed that everything changed for her when she saw another woman in mainstream culture who looked like her—Alek Wek. "A celebrated model, she was dark as night, she was on all of the runways and in every magazine and everyone was talking about how beautiful she was," she said.

Wek was born in Sudan and moved to England to escape the country's civil war. She first appeared in Tina Turner's "GoldenEye" music video in 1995, and signed with Ford Models the following year. She exploded onto the fashion scene in the late 1990s, walking in shows for Alexander McQueen, Chanel, Jean Paul Gaultier, Ralph Lauren, Vivienne Westwood and more. She's appeared on the covers of magazines including Elle and Vogue.

But even with Wek dominating covers all over the world, Nyong'o's feelings persisted until she finally understood something her mother repeatedly told her.

"I realized that beauty was not a thing that I could acquire or consume, it was something that I just had to be...What is fundamentally beautiful is compassion for yourself and for those around you. That kind of beauty enflames the heart and enchants the soul."

Click over to Essence's website to read Nyong'o's speech in its entirety. Prepare to grab some tissues.

This content is created and maintained by a third party, and imported onto this page to help users provide their email addresses. You may be able to find more information about this and similar content at piano.io
Advertisement - Continue Reading Below
More From Beauty
Glycolic Acid Toners to Leave Your Skin Glowing
Found: All-Natural Makeup Brands That Deliver
Advertisement - Continue Reading Below
How Model and CEO Miranda Kerr Does Self-Care
Tea Tree Oil Is a Great Zit Fix for Sensitive Skin
Pretend You're on Vacation With Beachy, Wavy Hair
Moisturizers Your Dry Skin Will Soak Up
Sunscreens Developed for Oily, Acne-Prone Skin
Deep Conditioners Your Curly Hair Will Love
The Best Retinol-Infused Creams, Oils, and Serums
This Film Is a Love Letter to Perfume-Making