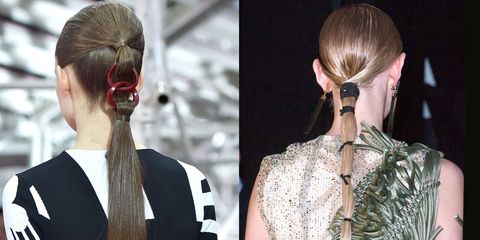 Fifty Shades of Grey mania knows no bounds now that subtle odes to the S&M flick seem to be turning up on the haute couture runways.

For Spring 2015, Dior and Armani Privé showed sexy twists on the classic ponytail that would surely light Christian Grey's fire. But fear not, these looks aren't just for those with tastes that are very...singular.

"Though it's classic, there is a 'Diorness' to it, a [futuristic take], a modernity because it has this very simplistic sort of feel," Palau told WWD. He also described the look as "fetish" on his Instagram, so there's that.

Giorgio Armani and hairstylist Odile Gilbert may say they were inspired by bamboo stems, but the sleek ponytails seen on the runway, sectioned off with black fabric bands, had a distinct tie-me-up feel, no?