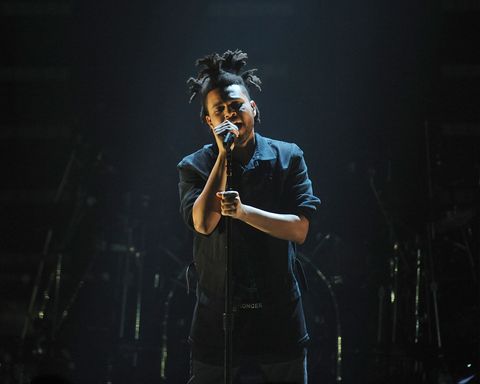 Update, 1/21: The wait is over! The full video for The Weeknd's Fifty Shades of Grey song is here, though the butt-less underwear and nipple pasties contained within make it decidedly NSFW. (Plus at one point, Dakota Johnson dangles overhead trussed up like a Thanksgiving turkey.) But go ahead and sneakily watch it anyway—you've..."Earned It."

Update 1/20: We thought the track was red-hot, and then we got a sneak peek at the music video—*fans self*. From what we can see so far, the video finds The Weeknd decked in a tuxedo, serenading a crowd from the stage while surrounded by scantily clad cabaret dancers.

Original Post 12/23: The Weeknd has upped the ante for the Fifty Shades of Grey film as only he can. Dare we say it? He might be giving Beyoncé a run for her money.

R&B's smoothest operator has unveiled his offering for the soundtrack and it's so unapologetically sexy it walks that fine line between early morning delight and embarrassingly NSFW—even with headphones safely plugged in.

Entitled, "Earned It," the amorous crooner doesn't hold back, whether it's his signature, sexually-charged lyrics: "Cause, girl, you're perfect/ You're always worth it/ And you deserve this/ The way you work it/ 'Cause, girl, you earned it," or the symphonic, fittingly-dominant instrumentals.

Much like the book, the ballad leaves little to the imagination. So, it's inevitable that a Christian Grey and Anastasia Steele roll in the hay will play out in your mind upon first listen. Enjoy.

Reading Fifty Shades of Grey Is Not Good For You, Apparently