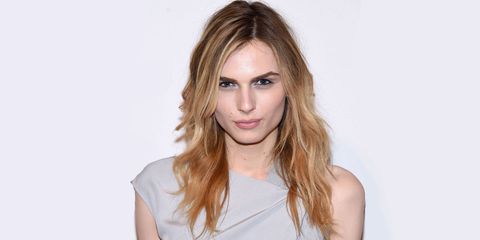 Update, 6/4: Behold: the first pics from Andreja Pejic's historic, gorgeous Make Up For Ever campaign.

The world is as diverse as the 40 shades of @makeupforeverofficial Ultra HD foundation :) wearing @ralphlauren

That smokey eye and orange lip, tho—told you that old makeup rule was *so* donezo.

Original post, 4/21: Tucked nonchalantly into a massive feature was a little sentence containing a huge piece of news: This year, Andreja Pejic will become one of the first transgender models to star in a major beauty campaign.

In a story published Tuesday, Vogue revealed the 23-year-old Bosnian stunner has signed on as the face of Make Up For Ever, following in the footsteps of Lea T, who made waves last year when Redken hired her as a spokesperson, and, more recently, YouTube personality Jazz Jennings, whom Clean & Clear tapped for its "See the Real Me" ads.

Brava. With this historic deal, we're ever closer to where we ought to be: celebrating the idea that there's not just one definition of beauty.